An IBM-compatible PC with an Intel 8088 processor from the 1980s, with a 5.25-inch floppy disk drive and a mini housing. The black bar on the case is the cover of the built-in hard disk ; such optical discrepancies often occurred with compatible devices due to the combination of components from different manufacturers. 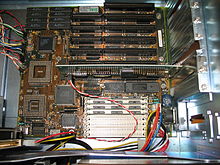 Main board ( motherboard ) of a typical IBM-compatible computer with the AMD 80386 processor replica AMD Am386 and ISA bus slots , 1992. 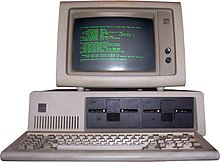 The IBM PC from 1981, which was the first model of the Compatible . A few years later, the PC / AT model followed , which was also copied en masse.

Historically speaking, personal computers or microcomputers that were based on the technical design of the IBM PC from 1981 and its successor models such as the IBM PC / AT were referred to as IBM-PC-compatible computers or IBM-compatible PCs . More rarely, the replicas were also referred to as IBM replicas (or clones), as they were actually technically largely identical copies, especially in the early years. Later, the term IBM-compatible was used less often and much more generally for systems that emulate a microprocessor of the x86 type and start a corresponding BIOS . The latter is being replaced by the more modern EFI .

IBM PC-compatible computers were also referred to as PCs for short , as a platform to distinguish them from Apple Macintosh models, the Atari ST series and others. However, since the term personal computer was used early on for platforms other than x86-based, this designation was not always clear. Due to the massive spread of compatible x86 PCs from other manufacturers, the importance of IBM as the initial market leader declined sharply in the 1980s. In 1987, IBM brought the newly developed PS / 2 series onto the market, which completely broke with the previous PC concept and introduced proprietary technologies such as the microchannel bus system that were deliberately no longer freely available to other manufacturers.

As a result, the PCs from IBM themselves were paradoxically no longer IBM PC compatible, with which IBM undermined the industry standard it had set itself . However, this was an economic failure, because large PC manufacturers such as Compaq did not make this swing. Instead, they successfully set their own technical standards such as the EISA bus to compete with the microchannel concept. With the sale of its PC division to Lenovo in 2005, IBM finally withdrew completely from the PC division.

For these reasons, the term IBM-PC-compatible is outdated and also technically incorrect since the PS / 2 line, which is why it is hardly used anymore. Current terms for x86-based computers are mainly the terms PC, Windows PC or Windows computer, after the dominant operating system , or, less often, Wintel computer as an artificial word from Windows and Intel , the market-leading x86 processor manufacturer.

A compatible PC designed by the designer Luigi Colani and sold under the Vobis brand Highscreen .

Since the IBM PC - in contrast to its competing products at the time - was built exclusively with commercially available standard components , this led to numerous replicas. The IBM PC developed into an unofficial industry standard because it could be recreated from IBM without licensing . At IBM itself, such imitations were somewhat belittlingly referred to as IBM PC compatible .

With the introduction of new processors from i286 and all later models with 32-bit word length, the chip manufacturer Intel integrated a (virtual) 8086 on the chip so that x86-compatible computers could still be built. In order to keep the power consumption of today's chips as low as possible, the 8086 functionality is now emulated by firmware integrated in the processor . Depending on the manufacturer and CPU, the microcodes used for emulation have names such as ROP, Micro-Op or µOp.

Hardware access must be coordinated under modern operating systems with multitasking capabilities. This takes place here, bypassing the BIOS, directly via the device drivers; the BIOS is only required when the operating system is booted.

For this reason, over the years the BIOS has also been freed from ballast that was felt to be superfluous. As early as the 1980s, numerous PC manufacturers dispensed with the ROM-Basic, which was available on the original IBM PC and which the IBM PC started when it did not find a floppy disk with an operating system. An implementation would have required additional effort and possibly the permission of IBM. The hardware abstraction interface for the datasette port also disappeared relatively quickly from the BIOS codes of the PC clone manufacturers due to lack of use. In today's PC motherboards with BIOS, the floppy interface has also been saved or severely restricted on the BIOS side; often only one drive can be configured. The support of older floppy drive types by current BIOS variants is also questionable.

Strictly speaking, these systems are therefore only partially compatible with IBM PCs , since the original IBM PC, for example, provided for the connection of Datasette and several 5.25 "floppy drives on both the hardware and the software side, what modern computers no longer offer, as hardware and operating systems have evolved. The PC architecture has been continuously adapted to these developments by adding and leaving out elements over the years. Therefore, it can be stated that the degree of compatibility with the IBM- PC in part as early as the 1980s, but also after the replacement of DOS by Windows 95 with the accompanying dwindling importance of the BIOS.

The core element of an IBM PC-compatible computer has remained an x86-compatible main processor over the years, which starts a BIOS, which essentially still has the functionality of the BIOS of the original IBM PC, adapted to the requirements of modern hardware and software , depicts. As a result, it is basically still possible to use DOS operating systems on modern systems and thus also numerous programs for the original IBM PC, so that the compatibility of modern systems with their "ancestors" is still given and can be regarded as high.

In the medium term, however, a further decrease in this compatibility level is to be expected, since many classic BIOS functions are in less and less demand. With the BIOS successor EFI, a definitive end to the era of “IBM PC-compatible computers” is in sight, even if EFIs with BIOS-compatible functions for older operating systems may still be implemented at the beginning. However, it is to be expected that these residual functions will then also be requested less and less by software and will gradually disappear from the firmware. With EFI and Microsoft's announcement that Windows 8 will also be able to use EFI instead of a BIOS for starting the operating system, the slow end of the BIOS and thus of the IBM PC-compatible computer has finally heralded.

Since modern operating systems are abstracting more and more hardware internals in various “layers” and through set up runtime environments , the significance of these changes, which take place on the lower levels, is hardly relevant nowadays. Today, the operating systems can be operated with different firmwares or loaders, often with very different hardware architectures such as B. bypass ARM SoCs . The term “IBM-PC compatible computer” starts at a level that is only of interest to a few users today and is therefore rarely used. Of interest to users today is the question of compatibility with certain operating systems, which today - for example in the case of Windows - usually includes compatibility with IBM PCs.

An ISA bus slot that was introduced with the IBM PC / AT and became the standard on the Compatible even after IBM switched to the proprietary microchannel .

From bottom to top: The EISA , ISA and the original IBM PC / XT 8-bit connector for expansion cards , initiated by Compaq and others as an alternative to IBM's microchannel .

In order for the operating systems available for IBM PC-compatible computers to work together with different hardware extensions, in addition to the x86-compatible processor, standardized interfaces are also required. The original PC had internal 8-bit ISA slots as well as a connection for up to two floppy drives. External there were serial and parallel interfaces and a keyboard connection, as well as a digital MDA monitor connection for monochrome text displays. However, these interfaces were expanded and modernized in the course of development.

Some of these interfaces are also used by other hardware. Use of connected extensions may require However, the availability of appropriate drivers may be required.

Almost all operating systems are available for IBM PC-compatible computers . The most common were or are: