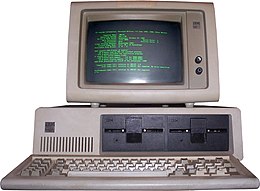 The IBM Personal Computer, model 5150, was the original model of today's IBM-compatible PCs in 1981.

IBM Personal Computer (dt. "Personal Computer", IBM PC for short ) was the model name of the first personal computer (PC) made by the US company IBM in 1981. Its successor models had the same name, with suffixes such as XT and AT . The device line was a great commercial success for IBM. The company set an informal, worldwide industrial standard and defined the device class of IBM-compatible personal computers that is still current today . The numerous replicas and continuations of the IBM PCs by other companies were referred to as IBM PC-compatible computers . The market today PCs with Windows - the operating system and x86 processors are based on the continuous evolution of the former concept.

The first IBM personal computer did not have a hard drive , but only one or two floppy disk drives , it was called the IBM model 5150 and was built unchanged from 1981 for almost six years. Successor systems with hard drives were called IBM Personal Computer XT and later, with an Intel 80286 processor, IBM Personal Computer / AT . After the unfortunate introduction of the Personal System / 2 models, which were not PC-compatible on the hardware side, by IBM and with the appearance of Microsoft Windows 3.0 , the term “IBM PC” became a rather historical term as early as 1990. Since the introduction of Microsoft Windows 95 , the PC market segment has practically only spoken of Windows compatibility.

The IBM Personal Computer Model 5150 was announced on August 12, 1981 and hit the US market in October. This machine was developed quickly in order not to leave the rapidly growing market for microcomputers to the competition - especially the Apple II . It was the first workstation computer from IBM, because at that time the company only offered the IBM 5100 and System / 32 systems intended for smaller companies .

Although the IBM PC was developed in a very short time and using the cheapest components available (see Commercial off-the-shelf ), it was a complete success. One of the greatest advantages was that, like the Apple II , it could be expanded with plug-in cards that could be retrofitted into the computer. The basic configuration, which was offered in the United States for 3,000 US dollars (according to today's purchasing power approx. 8,400 US dollars) and in the Federal Republic for 8,500 D-Marks (according to today's purchasing power approx. 8,800 euros ) did not have a hard drive, but just one or two floppy drives. In addition, due to the simple structure of the PC from standard chips easily available to everyone, various replicas were created in the Far East as early as 1983 (often incorrectly because they were imprecise, called an IBM clone ), which ensured the widespread use of the system architecture . The IBM PC quickly became an unofficial industry standard because it could be recreated without a license from IBM. Even over the operating system of the IBM PC, PC DOS 1.0, IBM did not have complete control because it was originally developed by Microsoft .

The term IBM PC coined the perception of what a PC is. From the mid-1980s onwards, PCs that were not IBM-compatible were simply not for sale , except in the home computer sector. There have never been any official tests or certifications for the guaranteed “IBM-compatible” property of the manufacturer of replicas of an IBM PC. A compatibility test with Microsoft's flight simulator program was often used as the criterion . This exhausted the hardware that was customary at the time to its limits and accessed BIOS functions so deeply that it could only be used with a 100% compatible BIOS.

In the later years, IBM did not have a lucky hand in further developing the IBM PC. While IBM tried to seal off the market from competitors with proprietary concepts (e.g. IBM PS / 2 computers and their Micro Channel Architecture or OS / 2 ), manufacturers such as Compaq , HP , Intel and Microsoft developed more sustainable and cross-vendor concepts Standards (e.g. Extended Industry Standard Architecture ), and with their market power were able to enforce these - in contrast to IBM - also as industry standards. Only in the business sector and in special branches such as the banking sector could the IBM PS / 2 models - actually intended as the successor to all PCs - hold up relatively successfully for several years. But then they failed - apparently the differentiation from competitors through the conversion of the bus system used to the "IBM microchannel" architecture, which is subject to license fees, had worked too well.

Even today, PCs based on x86 processors from Intel or AMD are largely compatible with their ancestor, the IBM PC, even if the attribute "IBM-compatible" has not been advertised for a long time. 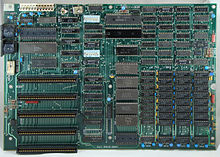 The main board (motherboard), the bottom left are the five ISA expansion slots , right below the memory banks of 64 KB RAM , on the top left of the Intel 8088 processor and the socket for the optional co-processor Intel 8087 , right above a number 74xx - Logic Devices

Was used as the processor 16 bit - processor 8088 from Intel, a version of the 8086 with an external 8-bit data bus. The CPU was clocked at 4.77 MHz, which is 4 ⁄ 3 times the color subcarrier frequency of the NTSC color television system, since TV sets were initially intended as monitors as with home computers . The 8-bit wide system bus ran at the same clock rate and was only later standardized in its 16-bit version introduced with the IBM PC / AT under the name ISA bus .

After its introduction, the device was initially delivered with either 16 or 64  kB of RAM, and later with a further developed main board with up to 256 kB. A coprocessor for fast floating point calculation was also included in the system design. This module with the designation 8087 could subsequently be inserted into an empty socket . The main memory itself could be expanded on the main board - depending on the version of the same - up to 64 or 256 kB, with plug-in cards from other manufacturers later even up to 640 kB. The processor itself was able to address 1024 kB , but the system design provided a generous 384 kB of the address area for other purposes, for example for the BIOS and the graphics memory.

In contrast to the successor system PC XT, there was also a connection for a data recorder , as was usual for home computers.

From 1983 the 5150 (and the expansion unit) could also be equipped with hard disks with a capacity of 10 MB. These were the 5.25 ″ drives with MFM recording and full height already used in the IBM PC XT Model 87, i.e. twice the height of a DVD drive common today.

The PC could be enlarged with the Expansion Unit 5161 Model 1 (expansion unit) by an identical housing with space for additional drives and expansion cards. For this purpose, a card with driver modules was inserted into the PC , which connected the bus of the PC with that of the expansion unit via a cable.

Further models in the range