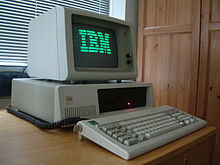 The IBM Personal Computer XT (Type 5160) or simply XT (for e X tended T echnology), introduced on March 8, 1983, is a minor further development of the IBM PC . Both devices, PC and PC XT, are often grouped under the abbreviation PC / XT and thus differentiated from the technically significantly changed successor model, the IBM PC AT .

In contrast to the original PC, it has a hard disk ( MFM ) with a capacity of 10 MB , a correspondingly larger power supply , a ST-506 compatible hard disk controllers , and more slots for memory and XT bus - expansion cards on the motherboard . It was also delivered with the newer PC-DOS 2.0, which for the first time supported the subdirectories that are almost indispensable when working with hard drives .

Furthermore, there was the XT than IBM 3270 PC with hardware emulation of a terminal type 3270 .

The IBM PC / 370 contained a / 370 -compatible CPU on two plug-in cards . The XT only served as an input / output unit. The PC / 370 was successfully used for program development for IBM mainframes.

IBM also manufactured the EMR (ElectroMagnetically Resistant) XT for military and diplomatic applications. It was secured by careful shielding measures against "eavesdropping" on electromagnetic radiation in accordance with the American TEMPEST standard.

The PCs XT and XT 286 can be expanded with the Expansion Unit Model 5161 by an identical housing with space for additional drives and expansion cards. For this purpose, a card with driver modules was inserted into the XT, which connected the bus of the XT with that of the expansion unit via a cable. The same option was available for the original PC.