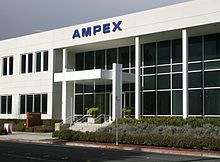 Ampex ( portmanteau word from A lexander M . P oniatoff Ex cellence) is a US-based company that in the development of tape recorders as well as tape recorders played a major global pioneering role. The company was founded by Alexander M. Poniatoff in San Carlos , California in 1944 as Ampex Electric and Manufacturing Company . 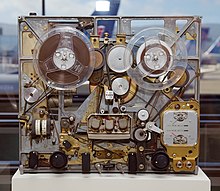 Ampex three-motor device from the 1960s

In 1947, Ampex developed the AMPEX 200 studio tape recorder, the veteran of American tape recorders. The development was based on the German AEG model K4 . After the end of the war, the US officer Jack Mullin had sent two tape recorders from Radio Frankfurt and 50 tapes from Germany to the USA as spoils of war. The excellent quality of German tape recorders was not known in the USA until then. Mullin improved the equipment he brought with him and was able to get Bing Crosby excited about the new technology. Crosby was enthusiastic about the excellent quality of the tape recorders, invested $ 50,000 in Ampex and put Mullin there as chief developer who developed the Ampex 200.