A mailbox , called bulletin board system (BBS) (freely translated as an electronic bulletin board ), is a mostly privately operated computer system that can be used for communication and data exchange via remote data transmission (DFÜ) .

Until the early 1990s, the IP-based Internet was mainly available in universities. In the 1980s and early 1990s, networked mailboxes were the primary gateway for non-academic Internet use or Internet-like services such as private mail and public newsgroups . Their relatively simple technology enabled a decentralized infrastructure operated by technically interested users, which today's Internet infrastructure can no longer achieve. Today, individual initiatives such as Freifunk are striving for a similar operating model in the hands of users.

In Germany, at the beginning of 1992, the loosely organized operator associations of the mailbox networks developed into the Individual Network eV purchasing community , which operated the first Points of Presence (POP) and thus offered IP access via dial-up ( SLIP ) in the local area before commercial Internet providers made this accessible to the general public at low cost.

With the advent of ISDN and especially DSL connections that were often bundled with Internet access , the days of mailboxes came to an end, at least in Germany. A small number of mailboxes still use the traditional dial-up technology, but many of the remaining mailboxes can only be reached without dial-up, directly from the Internet via IP ( Telnet ). In other countries, such as Taiwan , mailboxes are still common. A student organization from the National University of Taiwan, for example, operates PTT BBS, one of the largest mailboxes with 1.5 million registered users and 150,000 simultaneous users at peak times on campus with its own hardware. The mailbox software is maintained in an open source project.

The central element of a mailbox is a host (in the broadest sense, often home computers or PCs ) that operates the actual mailbox software. This provides data storage and access interfaces. Traditionally, digital access was via serial interfaces .

Telephone with rotary dial on an acoustic coupler

About acoustic and later selbstwählende modem enables users to have over telephone lines to dial . You thus occupied the access ( port ) for the duration of the call. Even the more widespread use of Telnet today occupies one of many virtual ports , but back then many mailboxes were only accessible via a modem and thus only accessible to one user at a time. During this connection, users can use the mailbox functions interactively via a menu-guided text interface. This ranges from reading and writing messages in public groups or in the private mailbox to other users to playing text-based games or downloading files. 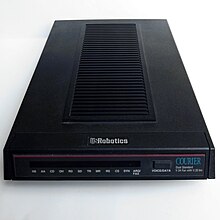 The USRobotics Courier Dual Standard with V.32bis modem reached 14.4 kbps in the early 1990s and was widely used in the USA and Germany thanks to targeted marketing to mailbox broadband drivers.

Until the early 1980s, acoustic couplers or internal modem cards were mainly used. The latter, however, required drivers and with the different bus systems from Altair, TRS-80, Apple-II and others, corresponding model variants were required. The Hayes Smartmodem 300s was the first to use the RS-232 connection for data and control signals in 1981 . For this purpose, Hayes employee Dale Heatherington introduced the escape sequence  +++ and the AT command set that is still used today . When +++ appears in the data stream (embedded in two 1-second pauses), the microcontroller introduced for this purpose in the modem switched to control mode and expected AT commands for configuring or dialing the remote station. All modem manufacturers took over this over time and it led to a great simplification of the modem connection to home computers, in which every modem could be used with slightly adapted AT command lines on the serial interface.

Acoustic couplers with 300–2400 bit / s were well suited for interactive use. Modems achieved five times as much in the early 1990s and 20 times as much by the end of the decade ( V.90 at 56,000 bps). This enabled networking and made the use of so-called points more efficient than interactive use.

The stand-alone mailbox is only accessible to its users. This limits the public that can be reached for mails and messages. Usually up to 100 and rarely even a thousand users could be reached via a mailbox. It was not uncommon to be in several mailboxes, but in Germany this was limited to the relatively inexpensive telephone area. In the 1980s, the costs of long-distance calls were often too high for dial-up data transmission.

The Z-Netz in January 1993 with approx. 280 mailboxes. Connections show the nightly netcalls ( peering ) for routing the messages.

With FIDO , Maus or Z-Netz , however, networks of mailboxes were formed that used common technical data exchange standards (e.g. MausTausch , ZConnect ) to exchange messages to other mailboxes in the same mailbox network and also to other mailbox networks via so-called gateways . For this purpose, the mailboxes automatically made the necessary long-distance calls at regular intervals and exchanged their data with one another.

In the same way, users could also move their interactive use to their own computer. The introduction of so-called points also allowed the automated exchange of data from subscribed boards and personal messages with the mailbox. After the relatively short call, the user read and answered his messages offline , i.e. in the Point program on his own computer without an existing connection to the mailbox.

Although the software used by the various networks was incompatible with one another, interfaces, so-called gateways, quickly developed between these networks, with which messages could be sent across network boundaries. These gateways also made it possible to exchange data with America, so that English-language news and discussion levels were also made available in many mailboxes.

The responsible operator has the status of system operator ( sysop ), his area of ​​responsibility is similar to that of an administrator . Each user of the mailbox has his own mailbox in which electronic messages can be stored for him and accessed by him. In addition, there are mostly public areas, often called forums, boards or echoes, in which users can exchange and discuss. An average mailbox offered an average of more than 300 boards (news areas) in which visitors (users) could read, write and reply. In addition, mailboxes often offered an extensive download area for files or additional services such as B. Online games (these additional services or online games were called "Doors"). The graphics corresponded at least to the teletext familiar from television .

As a rule, the use of the mailboxes was free of charge for the users, except for the actual connection charges for the telephone line . In the USA there were larger commercial mailboxes, some of which became ISPs . There were also a number of so-called warez mailboxes or protected areas in mailboxes that carried out software piracy and also charged money for this.

One of the first mailboxes is the CBBS (Computerized Bulletin Board System), which was created during the Great Blizzard of 1978 in Chicago and was operated by Ward Christensen and Randy Suess. In this context, Christensen also invented the XModem protocol, which was a technological basis for file transfer via mailboxes until the 1990s and is still used today for transferring files with smaller devices.

In West Germany this pioneering work is attributed to Günther Leue . In 1981 he founded IMCA Mikrocomputer GmbH together with his son and offered a networked platform for unified messaging . Its name GeoNet stood in many of the following German mailbox programs for the de facto operating standard for the text-based command line and navigation in the boards . With the legal hack in the form of the Association for the Promotion of Telecommunications (VFTK) in 1984, he levered out the terminal monopoly of that time and at that time enabled the legal operation of mailboxes in the Federal Republic. For his work he was made an honorary member of the Chaos Computer Club in 1999 , and in 1996 the Wirtschaftswoche titled him “German E-Mail Pope”.

With the rapid spread of the first personal computers , especially the Apple II , and the first usable acoustic couplers and modems , privately operated mailboxes emerged from the late 1970s, especially in the major cities of the USA . Local calls were free there at the time, which accelerated the spread of mailboxes, especially in metropolitan areas. In West Germany, where personal computers came up a little later, the time interval for local calls was introduced in 1980 under Post Minister Kurt Gscheidle ( SPD ) . In addition, the approval policy for modems in the Federal Republic of Germany was much stricter, as a result of which the mailbox scene developed much more slowly than in the USA and did not reach American proportions. In West Berlin, where the time interval did not apply until August 31, 1992 (you could stay on the line for as long as you want for 23 pfennigs), the mailbox density was significantly higher than in West Germany.

The world's largest private mailbox network, FidoNet (Fido for short), came into being in 1984 and quickly spread around the world. Emerged a short time later more in West Germany mailbox networks such as the MausNet , Z-Power (formerly Cerberus Network), Quick Power , GS-Net , T network , amnet and Ravenet , but found little or no international distribution. Political activists belonging to the New Social Movements also set up various mailbox networks; in the German-speaking area the largest was the CL network . The ecological-democratic party "ödp" had been using the Fido-based ödp-Net since 1989 before its website.

The average mailbox around 1992 had around 5,000 users. As this number grew, several modem lines were used in parallel. Some mailboxes had more than 10,000 users. In the high phase of 1995 there were probably an estimated 1,000 mailboxes in Germany.

Between 1989 and 1996 the number of mailbox users peaked. It is estimated at around 1.56 million on FidoNet alone. However, with the increasing spread of the Internet since then , the number of users has fallen sharply.