EPROM is a redirect to this article. Further meanings are listed under EPROM (definition of terms ) . 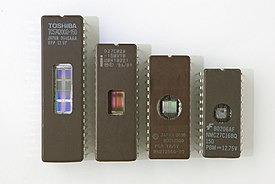 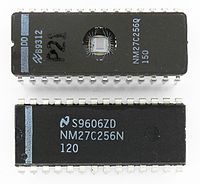 This block type can be programmed with the help of special programming devices (called "EPROM burners"). It can be erased using UV light and then reprogrammed. The EPROM has reached the end of its service life after about 100 to 200 erasure processes. The quartz glass window required for extinguishing (normal glass is not UV-permeable) makes the housing relatively expensive. This is why there are also designs without windows that can nominally only be written to once ( One Time Programmable , OTP), but can also be erased by X-rays . 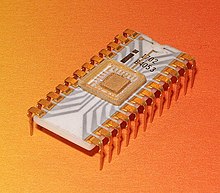 The EPROM was developed by Dov Frohman at Intel in 1970 and brought to market as Intel 1702.

An EPROM contains a matrix of memory cells, in each of which a transistor represents one bit . A memory cell consists of a MOSFET transistor with an additional gate electrode between the gate and the channel, which, however, has no connection. It can therefore freely assume a potential and is therefore called a floating gate . It is embedded in a very thin layer of silicon dioxide . Under normal operating conditions no electrons can get there or leave it. For programming, an increased voltage is applied to the gate, so that the floating gate is charged as more energetic electrons tunnel through the thin insulating layer . Thereby, the driving voltage shifts at which the transistor turns on (threshold voltage or threshold ). The data can now be read out as often as required, the reading voltage being below the programming voltage.

Short-wave ultraviolet radiation, typically 245 nm (4.9 eV ) from mercury vapor lamps, is used for erasure  . This excites photoelectrons that have sufficient energy to overcome the insulating barrier - the floating gates are discharged. The bit pattern is deleted and the EPROM is reset to its original state. This always affects the entire chip; it is not possible to delete only a part of it. The hard UV radiation also always creates defects, so that deletion cannot be carried out as often as desired. EPROMs are provided with a UV-B transparent window for erasing. It mostly consists of silica glass , rarely also of highly pure translucent aluminum oxide ceramic (DDR types, e.g. U2732). The windowless types that can only be written to once (OTP for One Time Programmable ) can also be erased with X-rays , as these penetrate the housing without a window and the component itself is the same except for the housing.

A conventional deletion process takes about 10 to 30 minutes. Since the ionization did not subside immediately after the light source was switched off and, depending on the design of the extinguishing device, the components are heated beyond the temperature permitted for programming, programming can only take place after a further waiting period. The times can be shortened significantly by using extinguishing devices with flash lamps. Instead of continuous irradiation, flashes of light are used. If the specifications of the block manufacturer for deletion are not correctly adhered to, apparently correct programming with a shortened data life span may result.

The quartz glass window should be protected with an opaque sticker after programming. An unprotected EPROM can be erased after approx. 90 days of direct sunlight. Illuminating the memory cells with an ordinary flash unit can cause temporary data corruption and thus computer failures.

Common EPROMs have 8-bit wide data paths and the total storage capacity is included in the designation. So a 2764 contains 64 KiB, which were organized as 8 Ki × 8 .

In the case of batches of 27xx EPROMs produced at a later date, the demand fell and there was only a need for inexpensive chips in closed housings, which were sufficient to be programmed only once. Cores were sometimes used for which the delete command of the comparable 28xx EEPROM from the manufacturer had an effect. 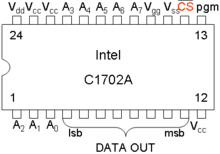 Pin assignment of an older, small EPROM type; however, the principle of pin arrangement has remained with the increased total number of pins.

Like other integrated circuits , common EPROMs are standardized in their pin assignment by JEDEC .

Since EPROMs cannot be rewritten indefinitely and corrections (which always first require deletion) take a comparatively long time, simulators are used in the development phase of electronic devices. These are available in different versions. For example, there are simulators with a USB connection that simulate EPROMs up to 4 MiBit in size. With these devices, the program code is loaded into the simulator via USB and the simulated EPROM is inserted into the circuit structure, for example via a plug-in adapter. The simulation can be started immediately. The circuit to be tested behaves exactly as if a real EPROM module were installed. A very cost-effective solution with an existing EPROM programming device is also offered by simple simulators made from battery-buffered RAM modules with write protection switches, which are programmed on the EPROM programming device and then plugged into the test circuit with write protection activated.