The Ogham or ( Old Irish ) Ogam script ( Irish [ 'oɣam ]) was used in Ireland and some western parts of Britain and Scotland ( Scottish Gaelic Oghum ) mainly from the 4th to 7th centuries on the edges of Ogham stones or to put short texts, in most cases personal names, on other carrier material . The name of the script shows strong etymological parallels to Ogma or Ogmios , the old Irish god of rhetoric. However, whether this god is the namesake of the script or whether folk etymology established the reference in retrospect has not yet been clarified. 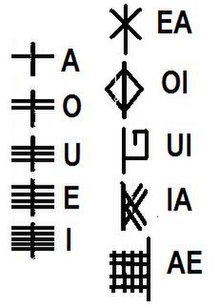 The incised name was always given in the genitive to indicate the relationship between the stone and the person ("This is the stone of ..."). It has not yet been fully clarified what the stones should ultimately characterize. They either indicated the ownership of the land or, more likely, were the tomb of the person indicated. According to a Middle Irish (thus much later) text, Etarcomol is buried and a stone with Ogham script is placed on his grave. Another example is an Ogham stone in Arraglen (County Kerry), in addition to a Tatzenkreuz bears the inscription "Rónán of Comgán the priest, son."

The writing runs from bottom to top and, if necessary, back down on the other side. Most of the names are archaic Irish, so the language level before the Old Irish kept (about 600 n. Chr.). More rarely, and especially in Wales , the inscriptions are bilingual: Irish- Latin . On some stones there are also runic inscriptions or crosses. Sometimes short comments are added to the names. An abbot , a bishop and a priest were mentioned. The word for priest appears in the form QRIMITIR (genitive from * QRIMITER <Latin presbyter ; cf. Old Irish cruimther ). This begs the question of the extent to which Ogham is to be regarded as "pagan" literature. Research disagrees on this point. The Ogham script was deciphered on the basis of a record in “ Leabhar Bhaile an Mhóta ” (“The Book of Ballymote”) from around 1400 . Crossed Ogham stones provide contradicting clues, as the cross and the Ogham sign sometimes overlap (almost or completely) without it being possible to determine which “ rock carving ” is the older. A clearer indication is possibly a stone at Ballyferriter on the Dingle Peninsula , on which one of the Ogham marks was apparently kept deliberately short so as not to damage the (already existing?) Cross. One such example is the Priest Stone (east of Dingle). Only two Ogham stones, both without Christian symbols, are known from Northern Ireland . In Scotland , Oghamin scripts exist in the Pictish language that cannot be deciphered .

Example of an inscription:

From this it follows: "(The stone of) Coílub, son of Corb, son (descendant of the tribe) of the Ciarraige". The Ciarraige mentioned here are immortalized in the name of County Kerry .

The Ogham system is not an independent alphabet . The assignment of the characters is most likely an encoding of one of the alphabets known to the Celts of the time, either the Latin or the Greek alphabet . Attempts to trace the alphabet back to the Germanic runes were unsuccessful. The signs were probably from the British Isles since the Paleolithic occupied Zählhölzern ( Engl. Tally sticks ) derived (see. Figure in). With their help, objects (mostly trade goods) were counted in groups of 20. The Ogham signs are also arranged in four groups of five (i.e. 20). There are also strong graphic parallels between the two sign systems . The individual letters are denoted by tree names that begin with the corresponding sound .

In Lebor Gabála Érenn , a compilation of Celtic mythology in Ireland from the 9th century, the invention of the Ogham alphabet is attributed to the legendary Scythian king Feinius Farsaidh .

Oghamin scripts are found in most of Ireland's counties, but there is a concentration in Cork, Kerry and Waterford counties. Kerry has about 1/3 of the total and within Kerry the Barony Corca Dhuibhne on the Dingle Peninsula has the highest concentration with about 60 Ogham stones. Outside Ireland, Oghamstones are found in areas where the Irish settled, such as Cornwall and Devon , the Isle of Man , Scotland and Wales, although most of the Scottish Oghamstones appear to be of Pictish origin. The distribution of the inscriptions seems to indicate that the practice originated in the south-west of Ireland. The fact that later inscriptions were found here in large numbers suggests that this area remained a focal point for Ogham until the end of the tradition.

The physical condition of the Oghamin script varies considerably. This is often caused by the reuse of Ogham stones in basements or other structures. In fact, over 40% of all ogham stones found in Ireland come from basements, especially in County Cork. More than 40% of the ogham stones are found near churches, although it is difficult to determine whether the sites are original. 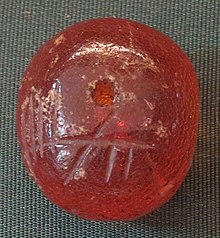 Ennis pearl from the 5th to 7th centuries

The approximately 400 known Ogham inscriptions can be found almost exclusively on stone pillars and stone slabs. Small finds are rare; in the Ogham literature only eleven small objects are mentioned, mainly everyday objects: in Ireland the Dublin Castle comb , the Ballyspellan fibula , the Ballinderry cube , the Ennis pearl , the Kilgulbin hanging bowl and the Tullycommon bone , in In Scotland the Bac Mhic Connain knife , the Gurness knife , the Bornais bone plate and the Buckquoy spindle whorl, and in England the Weeting knife handle .

Inisfallen-Ogham-Text : "Money is honored, without money nobody is loved."

Entries in Ogham script are also passed down in medieval manuscripts . The oldest entry is the Bernese Ogham characters overview (around 800 AD). Other examples are the Vatican Ogham character series (12th century) and the Inisfallen Ogham text (after 1193).

From a historiolinguistic point of view, the Ogham stones are of particular importance for assessing the origin of Old Irish . They emerged during the period in which the characteristics typical of Irish such as initial mutations , apocopes (ending syllables), syncope (internal syllables), palatalization , etc. were developing. On the one hand, they form the overall corpus for the language level of so-called archaic Irish and, on the other hand, an (indirect) bridge between the Old Irish and the mainland Celtic languages .

The script was not used to record myths , legends or even “Celtic” traditions . However, it is difficult to interpret the references in the old Irish legends to the use of the Ogham script in magical contexts, for example to prevent danger. In addition, the legends sometimes say that messages in Ogham script were carved into wood and transmitted by messengers, but this has so far not been archaeologically proven. Ogham scripts seem to have been preserved exclusively in stone and reproduce the contents described above.

The script was used again and again over the centuries and expanded in the Middle Ages to include various additional characters ("Forfeda", singular "Forfid") due to sound changes and adaptations to the Latin language . Today the Ogham characters also use neo-pagans as for the developed in the 20th century Celtic tree horoscope .

A special feature of the font is that it is the only Unicode-coded font that  also bears a visual mark when there is a space , since the edge of a stone naturally still exists.