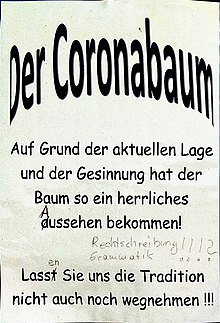 Plenk (from the English blank for " (the) space ") referred to in network jargon a typographically incorrectly set space before a punctuation or word characters (this includes, for example, point , point , exclamation point and question mark or dash and cut-off point); the use contradicts the spelling .

Following the regulations for the German language , spaces are not placed in front of the question mark or the exclamation mark, unlike, for example, in French (see below ).

Space before punctuation marks in English, however, required in an indent in the opening parenthesis and ellipsis , provided that for at least stand a whole word (see also ellipse ), as well as a hyphen when it is preceded by a word part to a the content to represent after repeating part of the word (example: production and sale of goods)

Plenks often lead to undesirable effects with automatic line breaks by programs that do not implement Annex UAX # 14 of the Unicode specification or implement it incorrectly, as the following example shows:

Here the expression is torn apart, distorting the meaning:

In the last example, the hyphen is also replaced by a dash, see below .

The word Plenk is a corruption of an English word for spaces, blank . It was introduced in the MausNet around 1988 by Johannes “Jödel” Leckebusch ; Since the mid-1990s, Plenk has also been a fixed term in the German-language Usenet .

Plenk himself gave rise to the complementary term Klemp .

However, if the lack of a space that is actually not allowed in front of a closing bracket would lead to a distortion of the meaning, it may be set:

In word processing programs like LibreOffice and Microsoft Word will automatically default creates enclosed by two spaces by a dash en dash replaced (dash). As a result, Plenken can lead to completely misleading spellings.

In contrast to German and English , in French - but not in French-speaking Switzerland - the use of a space in front of the question mark ( ? ), Exclamation mark ( ! ), Colon ( :) and semicolon ( ; ) in the font is mandatory. In addition, there is a space after opening ( « ) and before closing ( » ) quotation marks ( guillemets ) . This rule also applies to combinations of punctuation marks: «Quoi? »

A non-breaking space is used to prevent unwanted line breaks . Alternatively, programs can be used that carry out the break according to the Unicode line break algorithm , which in this case prevents a break even when a normal space is used. If the use of a non-breaking space is not possible, the same applies to French that no space is to be used. If there are different space widths, only half a space is often placed in front of the semicolon.

In the case of typographically correct typesetting, the above characters with quarter squares are excluded, whereby the font size is not yet taken into account.

The peculiarity is related to the French typographical tradition: A great many italics were used in early prints ; in addition, the graph f at the end of a word is more common than in other languages. This always creates a distance (from the foot of the f) to the point or comma, which is then implemented in the same way for the other punctuation marks.

In French-speaking Switzerland, the typographical rules of Switzerland are used, which - except for the colon : - do not have spaces in front of the punctuation marks mentioned above (see also quotation marks # Switzerland, Liechtenstein, France ). 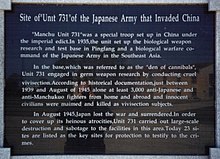 Missing spaces on a memorial plaque in Harbin (China)

Complementary to Plenk, the lack of a space after a punctuation mark or word mark - again especially in net jargon - is referred to as Klemp and is typographically just as incorrect as Plenk (see below for exceptions).

The word Klemp is - like Plenk - a loan word formation (from the English word clamp for screw clamp , which is related to the German word Klammer ); in the sense that it puts two words too close together). On the other hand, the choice fell on this word formation because it is the consonant reversal of Plenk (with adapted pronunciation: -np- becomes -mp- ). The complementarity of the two terms is reflected both orthographically and phonetically (interchanging p and k).

Omitting such a space is referred to in derivation as jamming .

Omitting a typographically correct space is sometimes done deliberately, especially in order to save characters , for example, when the number of characters is restricted . Examples:

In cases like the ones mentioned, a plumber is usually tolerated, even if it is still considered typographically "ugly".

In the Chinese and Japanese writing systems, no spaces are normally used before and after punctuation marks. The background to this is that punctuation marks generally take up the same square space ( ems ) as a character and, within this space, may be on the left or right edge. The rest of the square then remains empty, which looks like a small space. Punctuation marks such as dots ( . ), Comma ( , ) and closing brackets ( ) ) are thereby left open parentheses ( ( ) right within their quadrangle. Therefore, writers with a corresponding cultural background sometimes have a tendency to get stuck in the Latin writing system .