Territory of the Liao dynasty of the Kitan and neighboring empires

The Kitan (also Khitan , Qidan from Chinese  契丹 , Pinyin Qìdān ) were a Northeast Asian , possibly Mongolian people in what is now Manchuria , which existed in the 6th century. They were fighting with the Köktürken and Tang involved -China; In 947 they established the Liao Empire .

Their ethnic origin is unknown, their language shows similarities with the Mongolian languages , but also with the Korean language . Large parts of the vocabulary correspond to Korean words, which shows a great influence of Korean on Kita. 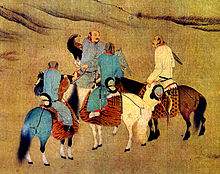 After the fall of the Uyghur Kaganate and the Tang Dynasty , they were able to take advantage of the power vacuum and very quickly establish a large empire. Yelü Abaoji ( Chinese  耶律 阿保機 , Pinyin Yēlǜ Ābǎojī , also Apaoka Khan, died 926), chief of the Yila tribe, great khan of the Kita and from 916 emperor, started an offensive to the west in 924, defeating the Kyrgyz in Mongolia, then swerving Gansu to Uyghur , Tanguts and Tuyuhun to subdue. In 926 the rather civilized Korean state of Balhae (Parhae) in what is now northeastern China and North Korea was eliminated.

Finally, Abaoji's son and successor Yelü Deguang ( 耶律 德光 , Yēlǜ Déguāng ) proclaimed the Liao Dynasty in northern China in 947 . Under the Liao and the subsequent Jin rule , cities up to the Amur River were founded in Manchuria , with an area of ​​60–70 hectares and walls up to ten meters high. There they practiced agriculture, bred horses, owned iron foundries and weaving mills. From the 10th to the 12th century, the Kitan used two of the Kitan scripts influenced by the Chinese script : the so-called large type, consisting mainly of logograms , and the so-called small type developed later. The latter also contains phonograms and is therefore of great importance for linguistics as the earliest surviving form of the Kitan language. Both scripts later influenced the development of the two own scripts of the Tungusian Jurchen , the forerunners of the Manchus and Xibe , which were also called uppercase and lowercase .

In the period from about 1116 (capture of Liaoyang) to 1125 (capture of the emperor), the Liao empire was taken over by its earlier vassals, the Jurchen (Jin dynasty), who also came from Manchuria.

A part of the Kitan fled westwards (partly through southern Siberia) and founded a new empire around 1130 as Kara Kitai under the Khan Yelü Dashi ( 耶律大石 , Yēlǜ Dàshí ). This empire asserted its existence in 1141 by defeating Sandschar, the Sultan of the Seljuks , in the Katwan steppe / Samarkand . It existed until the Mongol invasion in 1217/18.