The Second Polish Republic thus had a defined eastern border three years after its foundation. Its borders were only complete in the following year with the official annexation of the Republic of Central Lithuania, which it had founded but was formally independent until then .

Article 1 of the Riga Peace Treaty 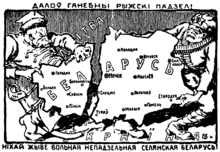 Caricature of the division of Belarus between Russia and Poland

The Polish side saw no gain in any further military action.

The Soviet side, on the other hand, was on the verge of military and economic catastrophe. The war drained the resources of the civil war torn country enormously. In September there was a shortage of food for the Red Army in the hinterland and the population was no better. Unrest, looting and anarchy spread. The city of Vyazma , the main hub for supplying troops in the west, was particularly hard hit . With these events, troop morale also fell. This was expressed in desertions and mutinies of entire units. Furthermore, the Soviet state was put under further pressure by the last offensive of the Whites under General Wrangel . Both sides thus had good reasons to end the war, even if neither side was able to achieve their initial goals.

The talks began on September 21, 1920 in the Latvian capital Riga . This place itself was symbolic and was chosen by Poland, because the Red Army had been repulsed from Latvia with Polish help. On September 23, Lenin authorized the chief negotiator of the Bolsheviks , Adolf Joffe , to make extensive concessions. Due to the hopeless military situation and the advance of the white General Wrangel, he was ready to make the greatest possible territorial concessions for a ceasefire in ten days. However, it was not until October 12 that the two parties were able to agree on a preliminary peace treaty that ended the war.

With the peace treaty, which was signed on March 18, 1921, the three contracting parties, Soviet Russia , Soviet Ukraine and the Republic of Poland , affirmed the armistice of October 18, 1920 and agreed to the end of the war. The agreement guaranteed Poland payments and substantial territorial expansion. This corresponds to some of the territories annexed in the three partitions of Poland by the Habsburg Monarchy (area around Lemberg ) and the Russian Tsarist Empire ( Volhynia and Podlesia ).

The Polish border now ran far east of the Curzon Line , in places up to 250 km east of the closed Polish language or settlement area. In large parts of the ceded territories, the majority lived Ukrainians and Belarusians, so Polish residents were in the minority there.

The territories integrated into the Polish state by the treaty were ethnically very heterogeneous . While in the big cities, such as B. Lemberg found a Polish majority, in contrast, in the rural population, Ukrainians or Belarusians as well as Lithuanians, Poles, Belarusians and Ukrainians were the largest ethnic groups , although none of them made up the majority in the entire area.

The economic conditions of the contract were regulated in a secret additional protocol. Poland guaranteed Soviet Russia free transport of goods to the Lithuanian Republic . The same was true for Germany and Austria. In return, the Soviet government undertook to pay the Polish part of the former tsarist state bank in gold, raw materials and concessions to the Poles. Furthermore, it was agreed that all industrial means of production would be returned to Poland, which had been dismantled during the World War under Tsarist rule. The same applied to all art and cultural assets since the partition of Poland in 1772. The armistice came into effect on October 18th. It was not until March 18, 1921, that a formal peace was concluded, as the Polish Army continued to support Ukrainian units operating against Soviet Russia.

Effects of the contract

The Polish negotiator Jan Dąbski was heavily criticized in his home country. Many politicians criticized the fact that the treaty completely ignored the interests of the Entente . Piłsudski himself was unimpressed. Above all, he criticized the fact that with the Sovietization of Ukraine his plans for an Eastern European federation ( Międzymorze ) were in fact buried. Many Catholics also saw the recognition of the Soviet regime as intolerable. Despite the military defeat and the failure of the prophesied revolution in Poland and Europe, Lenin was able to sell the treaty as a victory domestically. In doing so, he was helped by the break-up of the last white army under Wrangel, which was important for propaganda and which took place in 1920.

The Soviet government recognized Galicia as part of Polish territory, but insisted on a Soviet Ukraine, as a result of which Poland de facto dropped the Ukrainian national movement led to the People's Republic of Ukraine .