This article describes the lecture hall as a 'lecture room ' in colleges; for the term of the same name as a military sub-unit , see lecture hall (military) .

Audimax of the University of Klagenfurt

Smaller lecture hall at the Justus Liebig University in Giessen 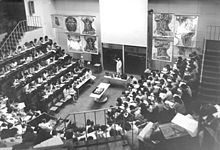 A lecture hall (also auditorium  - lat. Audire "to hear") is a large room or hall with (individual) writing space and seats in which lectures take place. It often offers space for several hundred listeners. The largest lecture hall in a university is usually referred to as the Auditorium Maximum or Audimax for short .

Lecture halls are usually found in universities, but also in schools (often called auditoriums here ) and in larger companies to enable oral lessons or larger events. In cultural institutions such as museums , too, there are auditoriums that are used for lectures, readings and discussions as part of (museums) educational tasks.

The rows of seats are usually arranged rising to the rear in order to allow a good view of the speakers, blackboard and cards, screen and the like from all seats. Lectern and podium (previously often with special access to the hall) are used by the speaker. In lectures accompanied by experiments, rows of seats are designed to be particularly steep, so that at the same time a good view of the experimental arrangement or the dissection table is possible. Many lecture halls are equipped with multimedia technology such as video projectors , loudspeakers , slide projectors and daylight projectors .

Numerous student customs are associated with the lecture hall of the universities , such as knocking on the desks as applause and the anonymous pawing with the feet as an expression of disapproval.

With Auditorium also is audience called.

The auditorium is also used to describe the hall or room of a monastery. People were allowed to speak here, and manual and paperwork was done here. It belongs to the regular buildings (i.e. to those that the rule of the order prescribes) and was mostly located near the cloister. Its affiliation to the regular buildings meant that it is under enclosure and therefore may only be entered by members of the monastery or in exceptional cases.