The university has often been listed as one of the top three universities in the country.

In 2017, Times Higher Education ranked the university among the 801 to 1000 best universities worldwide.

The tradition of higher education began in Poznan in 1518 with the establishment of the Lubrański Academy , which, however, had no right to award academic degrees.

The Polish King Sigismund III. Wasa granted the Jesuit College in Posen the privilege of granting masters and doctorates in 1611 , thus formally establishing the university. The privilege was then granted in 1650 by Johann II Casimir and in 1678 by Johann III. Sobieski confirmed. Resistance, not least from the Jagiellonian University in Krakow , meant that it was not finally expanded into a university.

After the partitions of Poland and the Congress of Vienna , Poznan belonged to Prussia until the end of the First World War .

History of the university 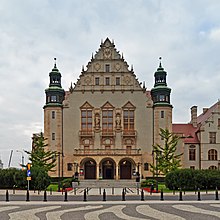 The centuries-old tradition of the Polish university was invoked when the first academic year of the new Piast University was inaugurated on May 7, 1919 (teaching started on April 4). The buildings of the Prussian Royal Academy in Posen were taken over for this purpose. In 1920 the university was named Uniwersytet Poznański ( University of Poznań ). After the Jagiellonian University in Krakow and the Warsaw University , the Poznan was the third Polish state university. The first rector was Heliodor Święcicki .

After the German invasion of Poland in September 1939, Poznan was annexed as part of the Warthegau . In the summer semester of 1941, the German Reich University in Poznan was opened with several faculties, which existed until 1945.

The Polish university, on the other hand, had been closed since the outbreak of war. In November 1940, underground teaching in Warsaw under the name Uniwersytet Ziem Zachodnich, UZZ ( University of the Western Territories ), was resumed and maintained until August 1944, so that over 2000 students could be trained during this time. The first rector of the UZZ was Ludwik Jaxa-Bykowski , the teaching staff were mainly academics from Poznan University.

Immediately after the end of the war, legal teaching was reactivated in Poznan in 1945. In 1950, the medical and pharmaceutical faculties were separated and converted into the medical academy .

The university was named after the Polish national poet Adam Mickiewicz in 1955.

Mathematicians Marian Rejewski , Jerzy Różycki and Henryk Zygalski are among the most famous graduates . As cryptanalysts , they succeeded in deciphering the German ENIGMA machine for the first time in the 1930s . Other personalities are the philosopher Joseph Maria Bocheński and the politicians Adam Michnik and Hanna Suchocka .

In addition there is the Pedagogical-Artistic Faculty in Kalisz .

Other UAM institutions that do not belong to a faculty are the European Institute in Gniezno , the Collegium Polonicum in Słubice and the Institute in Kościan . The university also has branches in Krotoszyn , Ostrów Wielkopolski , Pleszew , Pniewy , Śrem and Wągrowiec .

In June 2007, 49,170 students were enrolled. The rector of UAM is the chemist Bronisław Marciniak .

In addition to the Adam Mickiewicz University, there are other important universities in Poznan , including the Medical University and the Technical University mentioned above .