The Virginian tobacco ( Nicotiana tabacum ) is a species of the tobacco genus in the nightshade family (Solanaceae). It is the most economically important type of tobacco industry and is grown in a variety of varieties. The species itself originally emerged from a natural cross between forest tobacco ( Nicotiana sylvestris ) and Nicotiana tomentosiformis . 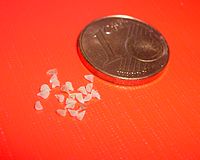 Seeds of the tobacco variety "Burley"

Virginian tobacco is an annual plant that grows 1 to 3 m high and is sticky hairy on all parts. The stems are thick and not very branched. The larger leaves are over 50 cm long, the shape of the leaf blade is ovate to elliptical or vice versa. The leaves are pointed or pointed towards the front, at the base they run down the stem or are sessile and encompassing the stem.

The inflorescences are multi-branched panicles . The flower stalks are 5 to 15 mm long. The calyx reaches a length of 12 to 18 mm and is covered with 4 to 8 mm long, narrow-pointed, unevenly shaped calyx lobes. The calyx lobes are shorter than the calyx tube. The crown is saucer-shaped, the coronet is colored white, pink or red, the corolla tube greenish-cream, pink or red. The corolla tube has a total length of 3.5 to 4.5 cm and is 3 to 5 mm wide in the lower part and widens to 7 to 12 mm in the upper part. The coronet is lobed or pentagonal. The stamens are unevenly designed, they start below the center of the corolla tube. The anthers of the four longer stamens are close to the opening of the corolla tube or are slightly above it. The fifth stamen is significantly shorter than both longer pairs. The stamens have a length of 2.5 to 3.5 cm and are therefore significantly longer than the anthers. The stamens are hairy at the base.

The fruit is a 1.5 to 2 cm long capsule that is narrowly elliptical to egg-shaped. It can stand out over the chalice or be enclosed by it. The seeds are spherical or broadly elliptical and are up to 0.5 mm long. Their surface is wavy like a network.

It is believed that Virginian tobacco originated in western South America , but it was introduced to Central America and Mexico before Christopher Columbus discovered America . Today the species is widely cultivated and is occasionally encountered as a cultural refugee. 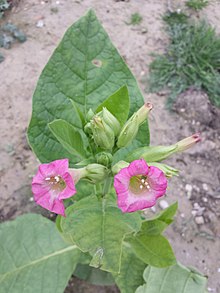 The cultivated tobacco is usually divided into groups, the most important of which are: