The pilum (plural: pila) was a javelin and the typical long-range weapon of the legionnaire of the Roman army . Probably of Samnite origin, the weapon was adopted by the Romans during the Samnite Wars . This takeover was a decisive step in the development from the phalanx to manipulation tactics . Initially, the use of the pilum was apparently restricted to the legions, but was probably also extended to the auxiliary troops in the imperial era at the latest . In late antiquity , the pilum fell out of use. 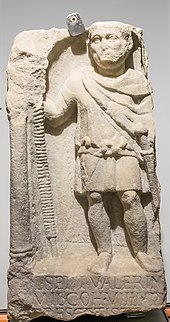 The figure of the Praetorian on the grave altar is shown in typical military clothing. The shaft of the pilum is wrapped with a kind of cord

Due to its design, the pilum achieved a particularly high level of penetration. It was a further development of the throwing lance and consisted essentially of two parts, the approximately one meter long wooden shaft and a square or round forged iron rod, which was usually roughly the same length and shaped into a square point at its tapering end. The attachment to the shaft was done either by tongue-like ends provided with rivet holes, so-called hinges, or by grommets that were pushed over the wooden shaft and then riveted. The ferrule of the shaft was either pyramidal or frustoconical to accommodate tang or spout.

There were heavy and light pila with a total weight of around 1 to 3.5 kilograms. Until the late republic, legionaries were sometimes equipped with two pilums, in later pictorial representations there is only one pilum each. The spherical lead weight attached to the end of the wooden shaft in the Claudian-Neronian period to increase the penetration power has not yet been archaeologically proven. The well-known Cancelleria relief from around 90 AD , today in the Roman Vatican Museums , which shows among other things Praetorians and beneficiariers in service uniform, reproduces such Pila. Below the ferrule there is a ball decorated with an eagle. It can also be clearly seen in the grave altar of the Praetorian Lucius Septimius Valerinus that the upper part of the wooden shaft of these weapons is wrapped with a cord to increase its grip. 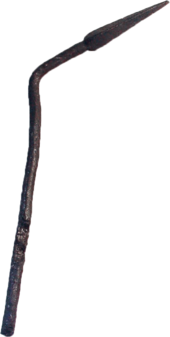 From a distance of around 10 to 20 paces (around 7.5 to 15 meters), the legionnaires standing in line threw their pila at the same time. As a result, some opponents were wounded or killed before the battle, because the thrown pilum concentrated its energy on a small point and was thus able to penetrate the shields . In many cases, the opposing warrior was hardly or not at all wounded, but at least severely hindered, because many Pila bent when penetrating the shield, as the iron shaft, unlike the actual tip, was not hardened. Immediately before an attack, these bent irons could no longer be removed quickly enough, so that the affected warrior was forced to drop his shield and go into battle without this important protection. This was especially true when overlapping shields were pinned together by Pila.

Thus, for instance at Caesar : "A great disadvantage it was the Gauls in fighting, that several of their shields often pierced by a Pilumwurf and had been stapled together so that they, as the iron had bent itself, the bullets nor pull out with a such disabled leftists could reasonably fight; many therefore, after shaking their arms for a while, preferred to drop their shield and fight unprotected. ”( Gallic War I, 25 )

In many cases, bending also prevented incorrectly thrown Pila from being thrown back. In order to limit the re-use of one's own weapons by the enemy even further, according to Peter Connolly there was a special Pilum variant with two rivet holes, in which a wooden rivet was not inserted into one hole. This is said to have been an answer to less powerful throws where the thin metal shaft did not bend. When attempting to pull out the pilum, the wooden shaft came loose and resulted in the iron remaining in the shield as an obstacle.

This traditional understanding of the functionality and use of the pilum contradicts some findings of experimental archeology. In several test series, the penetrating power of the pilum and the effectiveness against shields could be confirmed, but not the bending of the iron rod. The results show that the Pilum can penetrate shields with leather layers and can at least firmly anchor itself in shields coated with rawhide. The profile of the iron point makes it difficult to remove the pilum from the shield in a combat situation and the length of the iron bar prevents it from being knocked off with a melee weapon. In addition, the non-hardened iron bar bobs strongly after the impact, and the second point at the end of the shaft anchors itself in the ground when an opponent attacks. This drives the pilum through the shield hit or at least throws the opponent off balance. The experiments do not reveal any additional benefit from possible bending, but this could have been achieved by deliberately filing the iron rod.

In addition to its use as a throwing weapon, the Pilum could also be used as a close combat weapon, especially against cavalry.

The pilum gradually fell out of use among the legionaries in the late 2nd century, but the Praetorians in particular continued to use it until the 3rd century. Bent Pila were found, among other things, in connection with the Harzhorn event , which belongs to the period after 228 and is probably connected with the Germanic campaign of the soldier emperor Maximinus Thrax in 235. In late antiquity , the pilum was finally out of use and the spiculum was used instead.