The jazirah in the middle east

Seal of Philip as Elect from Salzburg

The Salzburg Cathedral Chapter unanimously elects Philipp von Spanheim , a son of Duke Bernhard II of Carinthia , to succeed Archbishop Eberhard von Regensberg, who died the previous year . In order not to endanger his inheritance claims on Carinthia, Philipp does not allow himself to be consecrated. Pope Innocent IV ignores the election and on February 25th appoints Burkhart von Ziegenhain, opponent of the Empire, as the new Archbishop of Salzburg . On March 6th, Burkhart was ordained a priest and bishop in Lyon, before he received the pallium from the Pope shortly afterwards . However, Burkhart no longer made it to Salzburg. He drowns in Lake Constance on 23 or 25 August while traveling from Lyon to Salzburg . It is uncertain whether it is an accident or a forced removal. Philipp von Spanheim succeeds Burkhart as administrator and Elekt , without ever being consecrated. 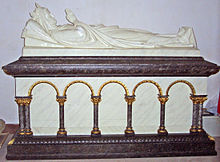 Ermesinde's tomb in the crypt of Clairefontaine Abbey in Belgium