An inquisitor ( Latin for "investigating judge") was the head and chairman of a church process within the framework of the inquisition with the primary aim of prosecuting heresies .

From the 13th century until the early modern period, inquisitors headed inquisition commissions, which were set up on behalf of the Roman Catholic Church , especially in southern and central European areas, in order to proceed against so-called heretics on the basis of the inquisition proceedings To induce "purity of faith" to repent and repent or, if necessary, to punish. Inquisitors could summon suspects, interrogate them, excommunicate them, give them absolution, order imprisonment or torture and pass judgments. They also had the right to appoint helpers and deputies. Since the 1240s, the term "Inquisitores heretice pravitatis" (persecutors of heretical depravity) became commonplace for inquisitors . In the Middle Ages , the activity of an inquisitor was usually limited. that is, it could end once an inquisitorial investigation for an area was deemed complete. It is also known from many clergy that they held the title of inquisitor , but were not active in the fight against heretics ( titular inquisitors ). With the officialization of the Inquisition in the early modern period in some southern European countries, permanent general or grand inquisitorial posts were created for superordinate inquisition officers (see also: Grand Inquisitor ).

According to canon law, an inquisitor could only be a clergyman who was at least 40 years old and also had legal knowledge and experience. Furthermore, he had to “devote himself to an exemplary life.” Inquisitorial powers were primarily given to bishops or religious from the Dominican or Franciscan order . In the modern Spanish Inquisition , secular jurists could also be appointed to the office of inquisitor. 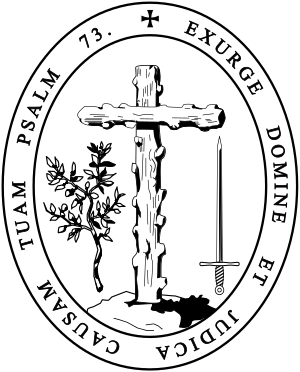 The coat of arms of the Holy Spanish Inquisition, Escudo de la Santa Inquisición from 1571

Catholic bishops, especially in the 13th century, were able to act as inquisitors of their own accord. The legal basis for this formed the 1184 under Pope Lucius III. (1181–1185) issued Bull Ad Abolendam , which even provided for an inquisition obligation for bishops, which was, however, only poorly complied with. At the same time, based on the model of Pope Innocent III in 1206 . Since the 1230s, the Holy See has increasingly appointed its own inquisitors as papal legates , especially from the ranks of the above-mentioned orders, in accordance with the decretals Qualiter et quando . Because of this different ordering practice, a distinction can also be made between episcopal and papal inquisitors. Although inquisitors had previously sat in court over heretics, full jurisdiction was only officially granted to them with the decretal Ad Extirpanda issued in 1252 under Pope Innocent IV . The same document also allowed the inquisitors to order the use of torture to establish the truth during interrogation. In 1254, under Pope Alexander IV , they were authorized to supervise torture interrogations. In this context, inquisitors were allowed to give one another absolution for their actions. Due to disputes over competency between papal inquisitors and bishops, the Council of Vienne decided in 1311 that the presidency of an inquisition to be carried out was to be chaired equally by the diocesan bishop and the appointed inquisitor.

The names of the senior inquisitors of many of the inquisitions that have been held are not known. The following list provides an (incomplete) overview of known inquisitors working there, sorted according to today's national territories. As far as known, the inquisitorial investigation areas and the corresponding periods are named after the names.