Pierre Cauchon , lat. Petrus Calconeus (* around 1370 in Reims , † December 18, 1442 in Rouen ) led as Bishop of Beauvais and official advisor to the nine-year-old King Henry VI. the presidency of the spiritual court in the Inquisition trial against the future French national heroine Joan of Arc .

Pierre Cauchon was a doctor of theology, master's degree in fine arts and licentiate in canon law at the University of Paris, where he served several times as rector. From 1415 to 1418 he took part in the Council of Constance as a legate of the Duke of Burgundy . In 1420 he became Bishop of Beauvais and in the same year played an important role in the fateful Treaty of Troyes , where he sided with the English.

On behalf of the English king he offered the Burgundians 6,000 francs for their extradition in 1430 after Joan of Arc was captured near Compiègne , which belonged to his diocese . The “Maid of Orléans” was finally sold to the English for the then very high sum of 10,000 francs. 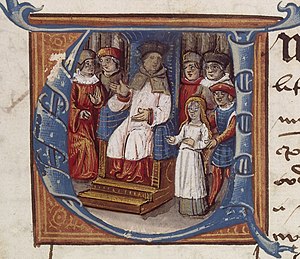 On January 9, 1431, Bishop Cauchon opened the most important trial in the history of France in public in the chapel of the castle of Rouen. The inquisition trial of Joan of Arc, accused of being “heretic”, “witch and sorceress, fortune teller and false prophet”, was carried out by Cauchon in close coordination with England's governor Richard Beauchamp, 13th Earl of Warwick , who from the beginning was nothing but wanted the girl's death. On May 24th, Jeanne recanted because of a sudden fear of death by fire and swore her "mistakes", whereupon Cauchon immediately condemned her after a short consultation "to the practice of salutary penance to permanent dungeon with the bread of pain and the water of sadness". On May 28, she withdrew the revocation and was declared "backsliding, excommunicated and heretical" by the spiritual court the following day. On the morning of May 30, 1431, Cauchon proclaimed in the market square from the tribune in front of the pyre a second time the expulsion from the church and, as prescribed, Jeanne's surrender to secular jurisdiction for execution. The ecclesiastical inquisition court immediately withdrew according to the old principle Ecclesia abhorret a sanguine ("The Church shies away from blood"). Immediately thereafter, Jeanne was handed over to the executioner, bypassing secular jurisdiction, and burned at the stake that had long been erected.

In 1432, Pierre Cauchon was transferred to Lisieux as bishop . He died of a stroke in 1442 while having his beard shaved. In the retrial initiated by Jeanne's family since 1450, which led to their complete rehabilitation in 1456, he could no longer be charged for his numerous legal violations and procedural errors.