The Concordat of Worms (first used by Leibniz in 1693 so called), also called Pactum Calixtinum immersive Heinricianum called, is in the September 23, 1122 Worms publicly exchanged Concordat between the Holy Roman Emperor Henry V and Pope Calixtus II. , With to which the investiture dispute was settled. The compromise solution of the Worms Concordat goes back, among others, to Ivo von Chartres , who, however, did not experience the conclusion himself. The original of the imperial copy is still in the Vatican secret archives , only copies of the papal counter-document exist.

Agreements comparable to the Worms Concordat were concluded with Aragon in 1208 , with England in 1213 and with France in 1268 ; also later with Sweden and Norway . 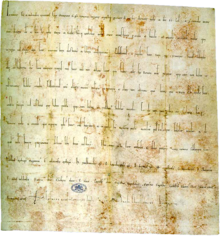 Emperor Heinrich V accepted the church's claim to investiture with a ring and staff , symbols of the spiritual marriage with the church and priestly pastoralism. The bishops were elected by the cathedral chapters. In return, Pope Calixt II admitted that the election of the German bishops and abbots should be negotiated in the presence of imperial deputies and that the elected should then be enfeoffed by the emperor through the scepter as a secular symbol of investment with the sovereign rights associated with his spiritual office ( " Scepter Loan ").

While in the German part of the empire the regalia should be awarded by the emperor before the consecration, in Italy and Burgundy the consecration took place first, which practically lost the emperor's influence on the appointment of bishops.

Heinrich V accepted the church's claim to the right of investiture and in the Worms Concordat renounced the investiture with ring and staff. Furthermore, he granted every church the freedom to choose the investiture:

“In the name of the holy and undivided Trinity. I, Heinrich, the exalted Roman Emperor by God's grace, - out of love for God, for the holy Roman Church and for the Lord Pope Calixt and for the salvation of my soul - leave all investiture with a ring to God, God's holy apostles Peter and Paul and the holy Catholic Church and staff, and I allow canonical elections and ordinations to take place in all the churches that exist in my kingdom and empire. The possessions and regalia of St. Peter, which have been taken away from the beginning of this dispute to the present day - in my father's time or in my time - will be returned to the Holy Roman Church as far as I have them, but if I do not I will faithfully help to have them refunded. Also the possessions of all other churches and princes and others, clergymen as well as laypeople, which were lost in these turmoil, I will now, according to the advice of the princes and in accordance with justice, return them as far as I own them, as far as I do not have them, I will faithfully help that they are returned. And I give true peace to Pope Calixt, the Holy Roman Church and all who stand and stood on their side. And in what the Holy Roman Church requests help, in this I will faithfully help her, and what she complains about to me I will provide her with due justice. All of this was negotiated with the consent and advice of the princes. Their names are recorded here: [...] I Friedrich, Archbishop of Cologne and Arch Chancellor, certified the copy. "

In return, Pope Calixt II admitted that the election of the German bishops and abbots should be negotiated in the presence of imperial representatives, but that the elected should be enfeoffed by the emperor through the scepter with the regalia associated with his spiritual office :

Although this settled the investiture dispute, the empire suffered severe losses as a result. The emperor's sacred aura was shattered and the unity of the empire and papacy that had existed until then was broken. This should lead to the reorientation of the idea of ​​the empire under the Hohenstaufen , whereby the problem persisted almost into the late Middle Ages .