The Russian Liberation Army ( Russian Русская освободительная армия - РОА Russkaja oswoboditel'naja armija - ROA ), also known as the Vlasov Army after its first commander , was a Russian combat unit that took part in the Second World War on the German side . The installation was made possible by Adolf Hitler at the end of 1944 , while members of non-Russian peoples of the Soviet Union were organized in the Eastern Legions three years earlier .

The ROA was organized by the former lieutenant general of the Red Army Andrei Vlasov , who wanted to unite all Russians in the fight against the Soviet Union . Among the troops were prisoners of war , forced laborers and Russian emigrants. The ROA received the status of the army of an allied state and was subordinate to the Wehrmacht in operational matters.

General Vlasov with soldiers of the ROA (1944)

Members of the ROA in Northern France (1944)

In the spring of 1944 the Waffen SS set up various Russian units. This included the XV founded on April 28th . Cossack Cavalry Corps . The Reich Leader SS and commander of the Reserve Army , Heinrich Himmler convinced the initially hesitant Adolf Hitler of it, a Russian association of ten Grenadier - divisions , a tank - Association and its own air force to start.

The recruitment began in the fall of 1944. There were Soviet prisoners of war and so-called "auxiliary volunteers" responded (HiWi) of various German military units. The advertisers were accommodated by the life-threatening conditions in the German prisoner-of-war camps . Many Russian prisoners chose the ROA rather than the risk of starvation or disease in the camps .

In September 1944, Himmler met with Lieutenant General Vlasov, and that meeting resulted in the creation of Komitet Oswoboschdenija Narodow Rossii (KONR) (Committee for the Liberation of the Peoples of Russia) . Himmler promised to help form a KONR army. Since the majority of the ROA troops were deployed on different fronts, their subordination to the KONR army was to be gradual.

On December 19, 1944, Goering ordered the formation of ROA air forces. They included a Jagdstaffel (16 Bf 109 G), a night Schlachtstaffel (twelve Junkers Ju 88 ), a bomber squadron (five Heinkel He 111 ), a connection relay and an air news section , the parachute - Airborne battalion Dallwitz and a training season, and a Flak - regiment .

On January 17, 1945, a second division, the 650th Infantry Division (Russian), was set up at the Heuberg military training area . In addition, a reserve brigade and were Panzerjäger - Brigade set up. In April 1945 the Russian Brigade 599 was set up and stationed in Viborg , Denmark .

On February 10, 1945, the General of the Volunteer Associations in the OKH , General of the Cavalry Ernst-August Köstring , handed over the first ROA division to Lieutenant General Wlassow at the Münsingen military training area. A total of 71 ROA battalions fought on the Eastern Front and 42 battalions served in Belgium , France , Italy and Finland .

At the time the ROA was officially founded, it had a troop strength of around 50,000 men. It was doubled by the end of the war. Vlasov was subordinated to other national formations that collaborated with the Germans. These included Cossack troops and the Kalmyk Cavalry Corps . At the end of the war there was only the 600th Infantry Division under the command of Major General Sergei Bunjatschenko. On April 11, immediately before the Buchenwald concentration camp was liberated , the Vlasov units stationed near Buchenwald shot into the camp. The division then fought successfully against a Soviet bridgehead on the Oder front on April 13, 1945 . Over 150 soldiers were killed in the process. 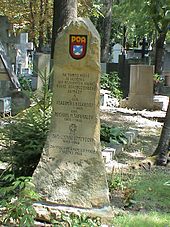 In view of the situation, Bunjatschenko had his ROA infantry division switch sides and fought from May 6, 1945 in the Prague uprising against the remnants of the German occupation troops and against German units moving through, who preferred to be captured in the West. Bunjatschenko's hope to earn a military and state home in a new Czech state after the war was not fulfilled. At that time it was clear, after consultation with the Allies, that these troops would be extradited to the Soviet Union.

After the end of the war, the members of the ROA, as well as other former Soviet citizens, were handed over to the Soviet Union by the United States - in accordance with the agreement reached in Yalta in February 1945 between the United States and the Soviet Union on liberated prisoners of war and civilians . The obligation to the principle of state sovereignty and international law made this indispensable.

Parts of the ROA are said to have been housed in the former Lichtenburg concentration camp before they were transported to Torgau . After the end of the war until 1947, members of the ROA were imprisoned in the Brandenburg-Görden prison.

In Moscow, Vlasov and nine of his generals were executed after a brief trial on August 1, 1946 . Other members of the ROA, which accused it serious acts were in forced labor camps of the Gulag deported. All other soldiers were sent into exile for six years , and by January 1953 most of them had returned from exile. 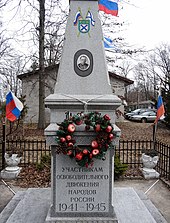 According to various military historians , Andrei Vlasov, with the help of German friends, would have managed to rise up against Stalin's regime at the head of an independent Russian national army. The majority of the members of the army had less sympathy with National Socialist Germany , but wanted to fight exclusively against Stalin in order to free their country from Bolshevism . How the ROA then intended to emancipate itself from Hitler's Germany and to prevent Hitler's well-known habitat and destruction plans remains unclear.

According to the Soviet Union, the members of the ROA were collaborators who supported the Nazi terror. Even in today's Russia , many citizens consider members of the Liberation Army to be traitors. To this day, members of the ROA defend themselves against the claim that their army, like the ROA foster father, SS chief Heinrich Himmler, was anti-Semitic .

A memorial for Vlasov and the participants in the Russian liberation movement was erected in the cemetery of the “Russian Orthodox Convent” in Nanuet / New York . Twice a year - on the anniversary of Vlasov's execution and on the Sunday after Orthodox Easter - a commemorative service is held for Vlasov and the soldiers of the Russian Liberation Army.