The Lichtenburg concentration camp - also known as the Lichtenburg assembly camp - was located in Lichtenburg Castle from the 16th century in Prettin ( Saxony ) from June 1933 to May 1939 . The building was used as a penitentiary from 1812 and was closed in 1928 due to poor structural and sanitary conditions. 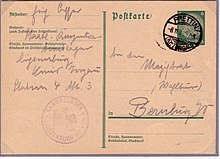 Wolfgang Langhoff , a former prisoner who arrived on December 6, 1933, found around 70 percent communists, 20 percent socialists and 10 percent politically unorganized prisoners in the Lichtenburg concentration camp. From 1934 onwards , men who had been persecuted as homosexuals were increasingly brought into the "light", and later also so-called professional criminals, who were previously convicted without trial. Initially, the police were responsible for guarding the camp. From mid-August, 150 SS men guarded the camp, the camp commandant was SS troop leader Edgar Entsberger from SS-Standarte 26. From June 1, 1934, the Dachau camp regulations were in effect .

After the so-called Röhm Putsch , around 60 SA men were briefly assigned to the Lichtenburg concentration camp in July 1934 . Jehovah's Witnesses were arrested especially from 1935 onwards ; a total of about 130 of them were in the Lichtenburg men's camp. After the Nuremberg Laws were passed in September 1935, the SS arrested Jewish women who were charged with “ racial disgrace ”.

1937–1939 Conversion to a concentration camp for women 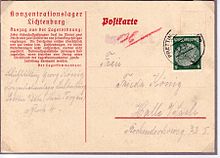 Since the castle had a dilapidated structure and was not considered expandable, the remaining 867 female prisoners were transferred to the newly built Ravensbrück women's concentration camp in May 1939 .

In addition to political prisoners who were detained in some cases since 1933 have been since 1935 reinforces the " Jehovah's Witnesses " mentioned Jehovah's Witnesses , returning emigrants , because of " race defilement pursued" Women of Jewish origin, Sintize and Romnija and so-called antisocial deported to the concentration camp and criminals.

After the closure of the Lichtenburg concentration camp, the castle served as a location for the Totenkopf Infantry Replacement Battalion II and, from 1942, the SS main witness office. Up to 65 prisoners from the Sachsenhausen concentration camp, who were housed in the cell area, were available to the SS for forced labor.

The following important information is missing in the section on the period after 1939:
Whereabouts of the prisoners; Number / number of sick, dead
Help Wikipedia by researching and pasting it .

After 1945; Establishment of a memorial

After 1945 the castle and the adjoining lands were used for agriculture until 1990. In 1965, a memorial was set up in the bunker of the former concentration camp and was expanded in 1974.

In 1995 the Ravensbrück / Freundeskreis e. V. fight for the preservation of the memorial. In the late summer of 2000, the Lichtenburg was to be sold as federal property by the Magdeburg Regional Finance Directorate . Protests broke out at home and abroad under the motto “Concentration camps for sale”. Inquiries were made to the Bundestag . In November 2004 the memorial was threatened with closure again. Only after a protest did the Saxony-Anhalt state government agree to share the costs. Long-term negotiations about the future and the sponsorship of the Lichtenburg Concentration Camp Memorial between the Wittenberg district, the state government in Saxony-Anhalt and the federal government led to the decision in 2006 to set up a memorial foundation in Saxony-Anhalt .

This has existed since January 1, 2007. Since the beginning of 2008, the Lichtenburg Concentration Camp Memorial has belonged to this foundation. Between 2008 and 2011, the former workshop wing was converted into a modern visitor information center. The new permanent exhibition was presented to the public when the new memorial opened on December 1, 2011. The working group "Schloss und Gedenkstaette Lichtenburg e.V." dissolved on January 1, 2012 when his association goals were achieved. The Lichtenburg Prettin Concentration Camp Memorial is supported by the "Schloss und Gedenkstätte Lichtenburg eV" association that has existed since 2010.

The perpetrators on site, the guards, are made up of different groups.

Arthur Liebehenschel was an adjutant in the Lichtenburg concentration camp from 1934 to July 1937. In 1940 he was in the service of a staff leader and representative of the inspector of the concentration camps.

For ideological reasons, female superiors were not SS members, but were referred to as SS entourage. Margarete Stollberg was from December 1937 to February 1939 and then Johanna Langefeld was supervisor until May 1939 . In October 1938, Maria Mandl was hired as a guard in the Lichtenburg concentration camp. She worked there with about fifty other women who, like Mandl, belonged to the SS entourage . In May 1939 she and the other guards were taken over to the newly opened Ravensbrück concentration camp near Fürstenberg / Havel . The mistreatment of camp inmates put Mandl in a good light with her superiors - she was promoted to superintendent. In the concentration camp, she monitored the daily routine and the work of the guards who reported to her. Among them, the female concentration camp prisoners were subjected to beatings and flogging. In October 1942 Mandl was transferred to Auschwitz-Birkenau concentration camp , where she became SS camp leader. 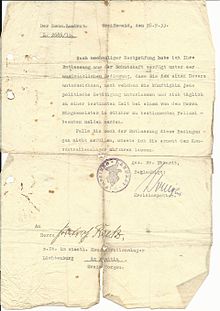 A dismissal order from 1933