This article deals with the SS-Obersturmbannführer and camp commanders. For the photographer, see Max Kögel . 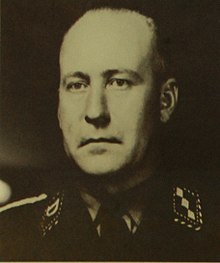 Max Koegel, the fourth son of a Catholic carpenter, became an orphan at the age of twelve. After completing primary school, he completed an apprenticeship as a shepherd and then trained as a mountain guide. From August 1914, he then served as a volunteer in a Bavarian infantry unit during the First World War . Wounded several times, including in the Battle of Verdun , he made it to the rank of private and received the Iron Cross, second class. After the war he worked first as a customs clerk, later as owner of a souvenir shop and then as a sales representative. Koegel was married twice; one son died of measles in 1929 at the age of eight. During the time of the Weimar Republic he became a member of the nationalist Bund Oberland , the Völkischer Bund and, from October 1931, the SA .

The Dachau camp SS was involved in the murder of Ernst Röhm in 1934 and in the disempowerment of the SA . This was followed by the rise and expansion of the SS. In 1935 Koegel was promoted to Hauptsturmführer.

From April 1, 1936, he received the post of camp adjutant in the Columbia-Haus concentration camp . In January 1937 he returned to Dachau in the same position under camp commandant Hans Loritz .

From the beginning of January 1943, ten years after joining the SS, he was given the post of camp commandant of the Flossenbürg concentration camp in May , which he held until the camp was closed in April 1945. On April 8, 1945 he was a member of the sham trial in which Dietrich Bonhoeffer , Hans Oster and Wilhelm Canaris were sentenced to death on behalf of Ernst Kaltenbrunner .

During the liquidation of the Flossenbürg camp in April 1945, Koegel ordered a death march for prisoners who were able to walk to Dachau. During the march, Koegel instructed the mayors of the respective communities to bury prisoners who had been shot on the roadside or died of starvation and exhaustion.

After the end of the war Koegel went into hiding with a farmer with the identity papers of a former concentration camp prisoner, but was arrested in June 1946 by members of the US Army in Bavaria. While imprisoned in Schwabach Prison , he committed suicide by hanging on June 26, 1946 . In his function as camp commandant, Koegel was responsible for the murder of hundreds of thousands of people.