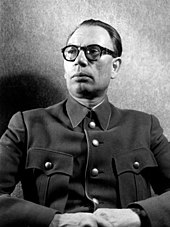 After training at a Russian Orthodox seminary, which he gave up after the October Revolution , and a brief study of agronomy , Vlasov joined the Red Army in 1919 . After completing a four-month commanding course, he was deployed as a platoon leader with the armed forces in southern Russia on the southern front. He served in the 2nd Danube Division. After the liquidation of the white troops in the North Caucasus , Vlasov fought against Wrangel's troops in North Tauria . Vlasov was a company commander and then served on the staff. End of 1920 Vlasov was ordered to mounted and Fußaufklärung and participated in the liquidation of the Revolutionary Insurrectionary Army of Ukraine in part.

From 1922 Vlasov held command and staff functions, but also occupied himself with his further training. In 1929 he finished the Wystrel courses (military academy for infantry). In 1930 Vlasov joined the Communist Party. In 1935 Vlasov was a listener at the Frunze Military Academy . The historian AN Kolsnik found out that Vlasov was a member of the military tribunal in the Leningrad and Kiev military districts during the years of the " Great Purge " 1937–1938 . Since August 1937 Vlasov was commander of the 133rd rifle regiment of the 72nd rifle division and since April 1938 deputy commander of this division. In the autumn of 1938 he was sent to China as a military advisor , with the full confidence of the political leadership. From May to November 1939 he served on the Supreme Military Council . For this he received the Order of the Golden Dragon.

In January 1940, Major General Vlasov became the commander of the 99th Rifle Division, which was honored with the Order of the Red Banner in October 1940 as the best division in the Kiev military district . The then People's Commissar for Defense, Marshal Semyon Tymoshenko , described the unit commanded by Vlasov as the most exemplary division in the entire Red Army. The army newspaper " Krasnaya Zvezda " published an article about Vlasov, in which his skills, discipline and diligence towards his subordinates were underlined.

Vlasov first fought on the Soviet side against the Germans in World War II and at the beginning of Operation Barbarossa was part of the 6th Army in the area north of Lemberg . For bravery and skill, he was appointed commander of the 37th Army in Kiev on the recommendation of Nikita Khrushchev . As the commander of the IV  Mechanized Corps , he carried out counterattacks in late June 1941 in the tank battle near Dubno from the Brody area and in July near Berdychiv . In September 1941 he commanded the 37th Army in defense of Kiev against the German 6th Army and managed to break out of the pocket in time. During the Battle of Moscow he received command of the 20th Army on the Western Front and, after the start of the Soviet counter-offensive, took back the city of Solnechnogorsk in January 1942 . For this he was immortalized in literature by the Soviet poet Ilya Ehrenburg . In April 1942 he replaced General NK Klykow as Commander in Chief of the 2nd Shock Army and fought under Merezkow on the Volkhov Front for the liberation of Leningrad ( Volkhov Battle ). The 2nd shock army succeeded in advancing further than the other armies, but could not be supplied in the position areas reached; withdrawal was prohibited. After the soldiers ate their horses, later tree bark and leather items, and many of them starved to death, the rest of them were wiped out by the Germans. Vlasov was able to hide for almost two weeks, but was captured by German troops on July 12, 1942.

On the German side 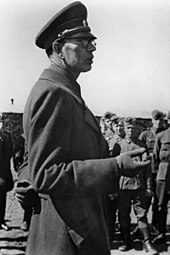 General Vlasov with soldiers of the Russian Liberation Army (ROA), 1944

While in German captivity, he initiated an anti- Stalin committee among the prisoners . The Reich Leader SS and Chief of the Reserve Army Heinrich Himmler convinced the initially hesitant Adolf Hitler thereof, a Russian Liberation Army with ten Grenadier - divisions , a tank - Association and its own air force to start. The recruitment started in autumn 1944. Vlasov allied with Hitler's Wehrmacht and built with their help the Russian Liberation Army on. On February 10, 1945, he took over command of the new army in Münsingen on the Swabian Alb . A little later, at the request of SS General Gottlob Berger , Vlasov took his personal friend Karl I. Albrecht as adjutant .

On April 11, 1945, immediately before the Buchenwald concentration camp was liberated , the Vlasov army stationed near Buchenwald bombarded the camp and marched off to Bavaria. Shortly afterwards, in the first days of May 1945, Vlasov broke the alliance with Germany by allowing his 1st Division under General Sergei Bunjatschenko to temporarily join the rebels in Prague . He himself was evidently aloof from this company. While these troops surrendered to the American troops after the final liberation of Prague from the German occupation by the Red Army , Karl I Albrecht, who was a prospective agent for the Soviet Glawnoje Raswedywatelnoje Uprawlenije (GRU) , lured the unsuspecting Vlasov via Bayerisch Eisenstein in early May 1945 into a trap in Klattau, which is now under Soviet control . It is unclear whether the Americans encouraged the arrest in order to extradite him to the Soviet Union.

His trial, which was conducted in camera, began on July 30, 1946 and ended two days later with the death sentence . On August 1, 1946, Vlasov was hanged in Moscow's Lubyanka .

Monument to Vlasov and the Russian Liberation Army, of the Russian Orthodox church in Nanuet in the US state of New York built (2006)

His political objectives published in the Vlasov propaganda motivated so-called Prague Manifesto of 14 November 1944. He wanted a fall of Bolshevism , but no return to the Tsardom . He proclaimed the protection of the individual against arbitrariness and the possibility of appropriating the fruits of one's own labor, as well as civil liberties and the protection of private property acquired through one's own labor.

The Soviet Union viewed Vlasov as a traitor, but his historical role in today's Russia is viewed more positively by a few historians. In their eyes he was the exponent of an opposition to Stalin that was widespread in the USSR, but not organized because of the bloody state terror , and saw no other option but to collaborate with his enemies .