The Roman-German King Heinrich II gathered an army in the Lausitz region for a campaign against Poland under Duke Bolesław I Chrobry . Because of an illness, however, he has to leave without having achieved anything. The army then devastated the lands of the Lusatian margrave Gero , who was not compensated for these attacks.

In March Basileios Mesardonites, the Byzantine governor of the Katepanate of Italy , began the siege of the city ​​of Bari, which was held by Lombard insurgents under the leadership of Apulians Meles and his brother-in-law Dattus .

Sulayman al-Mustain , Caliph of Cordoba , tries to conquer Toledo , where his predecessor Muhammad II al-Mahdi fled at the end of last year. However, he suffers a defeat, Córdoba is sacked by the Catalans and Muhammad II becomes caliph again. A little later, however, he was overthrown and killed in a coup by slave troops under al-Wahdid . Hisham II becomes caliph for the second time after he had to transfer power to the chamberlain Almansor in 997 and then spent the time in captivity under changing rulers. However, he is now under the dominant influence of al-Wahdid. At the same time, there are fighting with Berber troops who continue to support Sulaiman al-Mustain.

The Taifa kingdom of Dénia

The former slave mujahid begins to conquer the area around Dénia and the Balearic Islands , thereby establishing the Taifa Kingdom of Dénia within the Caliphate of Córdoba .

Other events on the Iberian Peninsula 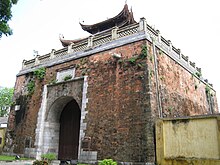 The north gate of the citadel today

Emperor Lý Thái Tổ , founder of the Vietnamese Lý dynasty, chose the citadel called Đại La on the west bank of the Red River delta, built in 866 by the Chinese Tang dynasty , as his residence city and called it Thăng Long ( rising dragon ). This is considered the founding day of Hanoi . The architecture of the imperial residence, which was built in the following years on the ruins of the Chinese fortress and on drained alluvial land, is based on Chinese models. In the square inner royal city ( Hoàng Thành ), the most important buildings are arranged along a north-south axis, with the throne hall, ministries and administrative buildings in the middle. To the north is the Purple Forbidden City ( Tử Cấm Thành ) with ornate palaces and gardens, in which the royal family resides. This inner area is enclosed by the outer city ( Kinh Thành ), which is also square, with the quarters of the common people, traders and craftsmen.

Detail from the document of the first mention of Ubingun

The Svetitskhoveli Cathedral in Mtskheta 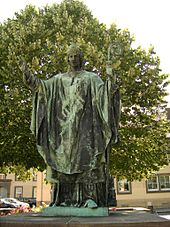