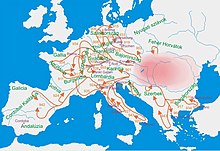 The Hungarian invasions (also known as the Hungarian storms ), referred to in Hungarian literature as the time of the conquest of the land , were a series of armed conflicts between the not yet settled Hungarians, the Magyars , and their neighbors , which began in 899 . Most often there were clashes with Eastern Franconia , until the Magyars suffered a devastating defeat in the Battle of Lechfeld in 955 . This epoch, in which raids to France, northern Spain and northern Italy, but also to Bulgaria, ended with the reign of Grand Duke Géza .

Meeting among the Carolingians

Warriors of the cavalry people of the Magyars first appeared in the years 892 to 894 as mercenaries for King Arnulf . But after their march across the Carpathian Mountains , they began an invasion of Italy in 899, in which they inflicted a heavy defeat on the army of King Berengar I of Italy . During the Carolingian era , a series of steady forays to the west followed.

As early as 881 there was an attack by the Magyars near Wenia ( Vienna settlement or river Vienna ). The Marcha orientalis of the Bavarian duchy was at that time, as a result of the throne disputes of the Carolingians, also divided by domestic political struggles, namely between the Wilhelminians and the Aribones , and involved in battles with the Moravian Empire. The Pannonian conquests of Charlemagne had already been lost to this.

After the death of Emperor Arnulf , the Magyars invaded the Lower Austrian Danube valley , the Marchfeld . A Bavarian exile under Margrave Luitpold and Bishop Richard von Passau succeeded on November 20, 900 on the north bank of the Danube in killing a unit of 1200 warriors, while the majority of the Magyars had already returned laden with booty. In the following year 901, the situation was repeated when the Bavarians again defeated the Hungarian army on April 11 on the Fischa , a tributary of the Danube, which was on its way back. The biggest victory, however, came in 904 or 906, when the Kende Kursan was ambushed by the Bavarians. The Bavarians invited the Magyars to a feast and slew Prince Kursan and his entourage.

Unimpressed by this, the Magyars smashed the Moravian Empire in 905/6 and invaded Saxony . Inspired by their victories, the Bavarians dared an invasion of Magyar territory in 907, which ended in catastrophe for them. In the battle of Pressburg the army was surrounded and destroyed. Luitpold fell and with him the highest dignitaries in Bavaria. It is unclear whether and to what extent the death of the most important Grand Duke of Hungary, Árpád , in the same year is related to this battle.

The new Duke of Bavaria, Arnulf the Bad , immediately began to raise an army of horsemen against the Magyars. For this he introduced a new lease obligation, according to which every secular or spiritual landlord had to provide one rider for every ten peasants, but the clergy refused to do this. When the Hungarians raided Saxony in 908, they raided Bavaria again in 909 and penetrated as far as Freising and Swabia . Arnulf also took advantage of the poor maneuverability of the loaded Magyars on the way back and beat them and their leader Szabolcs on August 11 on the Rott between Eggenfelden and Pfarrkirchen .

The defeat, however, cannot have been significant, as the Magyars invaded again as early as 910, swept up an army of the Swabians, whereby Count Palatine Gozbert fell, and on June 22nd defeated the Frankish army under King Ludwig the Child on the Lechfeld . At Neuching, Arnulf and his Bavarians succeeded in defeating a unit of the Magyars, but the year 910 is clearly overshadowed by the failure on the Lechfeld.

Incursions under King Conrad I.

Seal of Conrad I.

The reign of King Conrad I was significantly shaken by incursions by the Hungarians and uprisings in the duchies of Bavaria , Saxony and Swabia . As a result, his domain was essentially limited to his Franconian homeland .

After a foray into Franconia and Thuringia in 912, the Magyars moved through Bavaria and Swabia again the next year. Again Duke Arnulf and a strong army blocked their way back together with the Swabian Count Palatine Erchanger . This time the victory was clear - supposedly only 30 Magyars survived. At least an agreement seems to have been reached with the Magyars in the aftermath of the battle, probably regarding the extradition of captured Magyar leaders.

After his failed uprising against King Konrad, Arnulf used his new diplomatic relations in 914 and fled to the Hungarians. In the following 13 years Bavaria, protected by the Arnulf Agreement, was spared from further invasions by the Hungarians.

Reaction of King Henry I

Because the Magyars spared Bavaria in the years after Arnulf's flight, the burden on the other tribes became even greater. Duke Heinrich von Sachsen had already put an army of the Hungarians at Merseburg in 913 . In 915 the Magyars devastated Swabia, Thuringia and Saxony. In 915 they looted and destroyed Bremen , in 917 they destroyed Basel and penetrated into Alsace and Lorraine .

The year of Henry's coronation as king in 919 was also accompanied by a major invasion by the Magyars. When Heinrich was able to capture an important prince of the Magyars at Werla an der Oker in 926 , he negotiated a ten-year armistice for Saxony, which he used to carry out an army reform and build new castles. The castle order of 926 provided for the construction of refuge castles, the so-called Hungarian walls today , their provisions and equipment as well as the construction of a cavalry army.

However, it was inevitable that the Hungarians turned back to southern Germany. In 926 they stormed Augsburg, which was defended by Bishop Ulrich . On May 1st they looted the city ​​and monastery of St. Gallen . Duke Arnulf, who was now back in Bavaria, was forced to buy a peace by paying tribute.

On the Ingelheimer Hoftag 927 Heinrich and Arnulf decided to take joint action against the Magyars. King Henry refused to pay tribute to the Hungarians. This corresponded to a declaration of war. On March 15, 933, the East Franconian army met the Hungarians near Riade an der Unstrut. The Battle of Riyadh ended with a clear victory for Heinrich. The Magyars were driven from the battlefield and their camp captured. Heinrich emerged victorious from this fight, but decided to pay tribute to the Magyars voluntarily rather than to challenge his luck again.

Suppression by King Otto I.

Otto's victory over Berengar II (illustration of a manuscript, around 1200)

The Lechfeld Battle in the Saxon World Chronicle , around 1270

The defeat at Riyadh did not prevent the Magyars from taking a train to Byzantium with the Pechenegs in 934 . In 937 they moved as far as France, and in the following year they used a revolt against Otto I , German king since 936, to invade Saxony. However, the new castles gave the defenders enough leeway to repel the invaders.

On August 12, 943, the Bavarians triumphed with an offensive victory by Duke Berthold (son of Luitpold , brother of Arnulf) on the Welser Haide (Austria). He inflicted a heavy defeat on the Magyars. For the first time, they were not hit while in retreat. From this it can be concluded that the border area was successfully monitored. In 947 the Magyar leader Szabolcs died. Fajsz followed him . After another victory in 948, the Bavarians moved to Sopron under the newly appointed Duke Heinrich in 949 or 950 .

When almost the entire south of the empire rose against Otto in the Liudolfin uprising , the Magyars took advantage of this opportunity in 954 and moved in their furthest march to date via Bavaria and Belgium to northern France , back via northern Italy and Croatia . But when in the following year 955 a Hungarian embassy in Saxony offered to renew contracts, Otto turned down this offer. Because of the Hungarian attack, the most important opposition activists had to achieve military successes.

Otto presented the Magyar army on August 10, 955 in the battle of the Lechfeld . Unlike his father at Riyadh, Otto was not satisfied with the expulsion, but had the fleeing Magyars ambush and kill them until the entire army was worn out. This strategy of annihilating invaders is also shown against the Abodrites in the Battle of Raxa , when 700 soldiers were beheaded.

End of the Hungarian invasions after the battle on the Lechfeld

As a result of the defeat on the Lechfeld, the Magyars began to develop a more sedentary lifestyle. The later Kingdom of Hungary was able to arise, while further forays to the west did not take place.