After Emperor Heinrich II had already lay sick for three months in Bamberg, he set off on a trip to Magdeburg to celebrate Easter there. After the festivities he leaves and visits Halberstadt first and then Goslar. A violent relapse forced him to stay in the Palatinate Grona near Göttingen, where he finally died on July 13 of a chronic painful stone disease. Since the marriage with Kunigunde of Luxemburg remained childless, the rule of the Ottonians ended with Heinrich II . During the approximately two-month vacancy on the throne after the death of her husband, Kunigunde, with the help of her brothers Dietrich and Heinrich, ran the imperial business unchallenged. It also keeps the imperial regalia in its power. 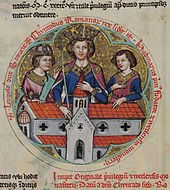 On September 4 in is Kamba the election of Conrad II. King of Germany on the named after this event King chair at Lörzweiler . With this the time of the Salians begins . The Archbishop of Mainz Aribo acts as election officer, campaigns for Konrad and is the first to cast his vote for Konrad. Since the other candidate for the royal throne, Konrad the Younger , renounces and is the first of the secular princes to vote for the older Konrad, Konrad is then elected unanimously. The choice is confirmed by the handover of the imperial regalia by the Emperor's widow Kunigunde. A few days later, on September 8, Konrad is anointed by Aribo in Mainz Cathedral and crowned king .

Gisela on a panel from the 15th century

Since Aribo refuses to coronate Konrad's wife Gisela von Schwaben for reasons that can no longer be identified with certainty , he then forfeits the Mainz coronation right. Why he does this is all the more incomprehensible as Aribo has pushed through his candidate and he was probably appointed Arch Chancellor for Italy by the new king immediately after the election . In addition to that for the northern parts of the empire, the Italian department of the chancellery is also subordinate to the Archbishop of Mainz. The inferior rival Aribos, the Archbishop of Cologne Pilgrim , uses the chance to exercise and finally claim the coronation right already granted to him by the Pope and crowns Gisela 13 days later on September 21 in Cologne at the beginning of the ensuing royal ride .

The Golden Gate of Kiev

In the struggle of the sons of Vladimir for the succession, Yaroslav's Varangian troops under Jakun are defeated by the Slavic contingents of his brother Mstislav in the battle of Listwen .

On April 9 pope dies Benedict VIII. Rome. His brother Romanus of Tusculum is elected as his successor by simony and takes the name John XIX. on. Since he was a layman at this point, contrary to the canon, he received all orders in one day.

Gunther von Meißen becomes Archbishop of Salzburg after his predecessor Hartwig died on December 5th of the previous year . Gunther is the son of Margrave Ekkehard von Meißen , his mother is the Billungerin Swanhilde. He received an excellent education in the famous Notkers School of Liège and before his appointment as Archbishop he was Chancellor of Emperor Heinrich II , thus putting an end to the archbishop's traditional ties to the Bavarian nobility.