The title of this article is ambiguous. Further meanings are listed under 964 (Explanation of terms ) . 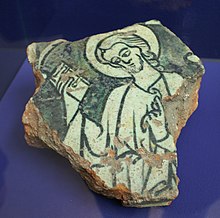 Shard from the mock grave of Benedict V in Hamburg