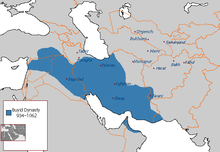 The Persian Bujids occupied Baghdad and took over the patronage of the caliphs for over a hundred years . The Abbasids are politically disempowered and only the spiritual leader of the Sunni Muslims . In the north, Saif ad-Daula from the House of the Hamdanids succeeds in establishing his independence as the emir of Aleppo .