On his third campaign to Italy , the German-Roman Emperor Otto I shifted his radius of action to the area south of Rome from February . On trains to Benevento and Capua he accepts homage from the local dukes such as Pandulf I. Since Byzantium claims supremacy over these areas and its rulers see themselves as the only legitimate holders of the imperial title, the conflicts with Emperor Nikephoros Phocas intensify .

Otto I and Pope John XIII. travel together from Rome to Ravenna to celebrate Easter there. In order to promote his dynastic plans, Otto, in a letter written together with the Pope, urges his son Otto II to travel to Rome in the autumn to celebrate Christmas with them. This occurs from Augsburg on the train over the Brenner. In October, father and son meet in Verona and move together to Rome via Ravenna. On December 25, Otto II is crowned co-emperor of the empire in Rome. In the same year, negotiations begin for the twelve-year-old to marry the Byzantine princess Theophanu , who is about the same age .

Other events in Central and Eastern Europe 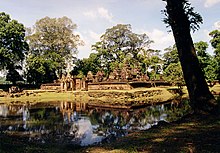 The inner part of the temple area