This article covers the basics. For the commercially available designs see memory module

Microelectronic memory structures are implemented in and on a semiconductor crystal so that a memory chip (see also Die ) is created. The chips are completed to form integrated circuits or processed further without caps.

The data are stored in the integrated circuits in the form of binary electronic switching states . Its predecessors were the magnetically operating core memories , which were not replaced by semiconductor memories until the early 1970s. More recent developments aim to combine the magnetic storage principle microelectronically into high-density, non-volatile memories ( MRAM ). 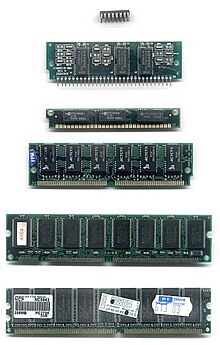 Nowadays, personal computers work with a word length (also called “word width”) of 32 or 64 bits. In the past, for example in the first pocket calculators , memory cells were 4 bits (a half-byte or nibble ) in size. The first PCs, on the other hand, had 8-bit wide memory cells. For simple controls (see: Microcontroller ) 8 bits are still used today.

Word widths of 6 or 7 bits were also used in earlier computers , since alphanumeric processing could be carried out with 64 or 128 storable characters . However, these memories were not yet implemented as semiconductor memories. The Hollerith punch card had a word length of 12 bits.

Memory cells are arranged in a 2 R × 2 C matrix. The memory cells are addressed and written to or read out via word lines and bit lines. A row and a column decoder are required for this. This enables direct access to any memory cells ( random access ). Therefore this arrangement is called Random Access Memory (RAM).

This type of addressing requires fewer contact areas on the chip, making it cheaper to manufacture.

The following table gives an overview of the different memory types (the sales figures given relate to the year 2005 and are taken from the Elektronik Scout 2006; SRAM does not stand for SRAMs contained in processors.):