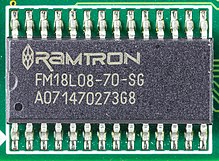 As a Ferroelectric RAM ( FRAM or FeRAM ) is called a non-volatile electronic memory type on the basis of crystals having ferroelectric properties, i.e., the ferromagnetism analog electrical properties.

The structure corresponds to that of a DRAM cell, only a capacitor with a ferroelectric dielectric is used instead of a conventional capacitor. Like ferromagnetic materials, ferroelectric materials can have permanent electrical polarization even without an external electrical field. This polarization can be "switched" in a different direction by an external field, which is the basis of the FRAM's storage mechanism.

A frequently used ferroelectric is barium titanate , BaTiO 3 , which crystallizes in the perovskite type . The positively charged titanium ions align to one side of the crystal, while the negatively charged oxygen ions align to the opposite side, which results in a dipole moment and thus the permanent polarization of the entire crystal.

On a semiconductor - Wafer a ferroelectric thin film is applied to the gate insulator replaces the usual FET memory cell. The layer consists of z. B. lead zirconate titanate (PZT) or chemically Pb (Zr x Ti 1 − x ) O 3 or strontium bismuth tantalate (SBT, SrBi 2 Ta 2 O 9 ). The storage and erasure process is implemented by a voltage change and thus a field and polarization change in the ferroelectric layer.

There are different circuit variants for ferroelectric memories. The most common are the so-called 1T1C or 2T2C cells, each with one or two transistors and capacitors with a ferroelectric dielectric . The transistor is required in any case to select the memory cell to be written to, since ferroelectrics do not have a sharp switching voltage, but rather the switching probability increases with the strength of the voltage and the duration of the voltage pulse. Cells are written to by setting the polarization of the ferroelectric using a voltage pulse via the word and bit lines after the desired memory cell has been selected.

The memory cells are also read via voltage pulses, the memory cell being written to with a defined state. Depending on whether the polarization direction is reversed or remains the same, a different displacement current results , which is converted by a sense amplifier into a corresponding voltage signal on the bit line. Since this reading process destroys the existing polarization, the cell must then be rewritten with the original memory content.

There are also 1T cells that only consist of a ferroelectric field effect transistor (FeFET). In an FeFET, the gate insulation is replaced by a ferroelectric dielectric (analogous to the floating gate in flash memory). The electrical polarization of this dielectric influences the current-voltage characteristics of the source-drain junction: Depending on the polarization direction, the transistor blocks or switches to continuity. The FeFET is written by applying an appropriate voltage between gate and source. The FeFET is read out by measuring the current when a voltage is applied between source and drain. The readout process is not destructive.

Service life and causes of failure

FRAMs also become unusable after a certain period of use. High temperatures accelerate the decay. There are two possible causes of failure: depolarization and imprint. With depolarization, the polarization level of the cell decreases over time. As a result, the current status is no longer correctly recognized after a certain time. This effect increases at high temperatures. In addition, the cells must not be operated above the Curie temperature of the ceramic, otherwise the ferroelectric properties of the ceramic will disappear due to the change in the spatial structure.

FRAMs are manufactured by Fujitsu and Cypress Semiconductor Corporation , among others . The company Texas Instruments used in FRAM microcontroller series MSP430 .