The HP Inc. (until 1 November 2015 Hewlett-Packard Company [ hjuːlɪt pækəd ]) is one of the largest US-based PC - and printer manufacturer , registered in Wilmington , Delaware , with corporate headquarters in Palo Alto , California .

On November 1, 2015, the company's business was spun off as Hewlett Packard Enterprise and the Hewlett-Packard Company was renamed HP Inc. Therefore, HP is no longer an abbreviation for Hewlett-Packard, but an official company name. As part of the demerger, 252,000 employees moved to Hewlett Packard Enterprise, while 50,000 employees remained at HP Inc. 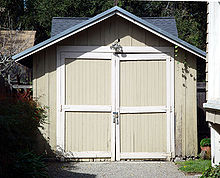 In the 1970s, HP offered the HP 1000 (16- bit ) computer series with the multi-user operating system Real-Time Executive and the single-user operating system DOS (not to be confused with MS-DOS ). In the commercial sector there was the HP 3000 computer with the MPE operating system . For many years, HP was active as a manufacturer in the field of scientific, programmable pocket calculators (for example HP-48 ) and measurement technology.

The HP 9000 series of computers with HP-UX as the operating system followed in 1982 .

HP is known (primarily by end customers) as a manufacturer of printers. Consumables (ink or toner), in particular, represent a large part of the company's profits. HP has developed, patented, and implemented various techniques to prevent users from using alternative ink or toner. The techniques are controversial for reasons of data protection and competition law and have been partially prohibited in the EU since 2007 as a means of preventing competition.

The product range extends from pocket calculators, desktop PCs, notebooks and tablets to printers. The company is the world market leader for printers, copiers and multifunctional devices with a market share of 37.30 percent (as of 3rd quarter 2012).

At the end of October 2014, the company presented a 3D printer that combines various liquid materials.

The company invests approximately $ 3.5 billion annually in research and development.

The German headquarters are in Böblingen , the Swiss in Dübendorf and the Austrian in Vienna . HP is represented throughout Germany by sales and service branches. 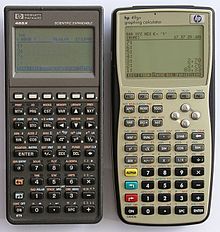 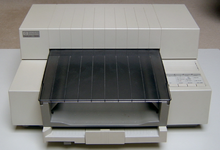 HP was founded in 1939 by William (Bill) Hewlett and David Packard , both Stanford University graduates , with seed capital of $ 538. HP's first product, the HP200A , an audio frequency generator , was built in a garage in Palo Alto, California . This garage is now considered the birthplace of Silicon Valley . One of the first customers was the Walt Disney Studios, who purchased eight audio frequency generators for their animated film Fantasia .

In 1959, HP opened its second manufacturing facility outside of California in Germany (the first subsidiary was established in Geneva , Switzerland on April 1, 1959 ). After the two company founders visited Germany, the choice fell on Böblingen . There, 18 employees began to produce in the back building of a knitwear factory according to plans by the American parent company. The location in Germany grew rapidly, in 1961 150 employees moved into the new Böblingen plant. Ten years later there were 1020 employees.

In 1964 HP developed a portable atomic clock based on cesium.

On January 5, 1980, Hewlett-Packard announced the construction of its first personal computer . In 1984 a consumer inkjet printer , the HP ThinkJet , was introduced. The printer was based on thermal inkjet technology and replaced the dot matrix printer .

On March 3, 1986, HP.com was registered, the ninth oldest .com and first two-letter domain .

In 1987 Hewlett-Packard's first color printer, the HP PaintJet, and in 1990 the HP Deskjet 500, a workstation and mass printer with a printing speed of up to 3 pages / min and a graphic resolution of 300 dots / inch, were brought onto the market.

In 1995 HP took over the US manufacturer of Vector mini supercomputers, Convex Computer .

On March 17, 1997, the acquisition is HP in the Dow Jones - share index on the New York Stock Exchange .

In 1999 HP was split into two independent companies:

Through further spin-offs and sales from Agilent, medical electronics came to Philips Medical Systems in 2001 ; the semiconductor division was initially sold to investors in 2005 and then floated on the stock exchange as Avago Technologies in 2009, with Philips completely taking over the Lumileds optoelectronics joint venture. Avago renamed itself Broadcom Inc. with the acquisition of former competitor Broadcom in 2016 . In the same year Agilent spun off the measurement equipment division as Keysight Technologies .

In 2002 the company merged with the computer manufacturer Compaq , which had previously taken over DEC and Tandem , and significantly expanded its importance in the computer market. The merger was very controversial and was fought stubbornly, but ultimately unsuccessfully, by the company's founder's son, among others.

In 2004, HP Germany acquired the Triaton Group from ThyssenKrupp AG for 340 million euros. Up to this point in time, Triaton was one of the largest manufacturer-independent IT system houses in Germany and, with around 2,200 employees, had achieved sales of around 370 million euros in the previous year. HP thus expanded its market position in IT services. The takeover was not only followed by job cuts at Triaton itself, it was also the reason for further site closings and job cuts in Germany.

In 2004 HP acquired the British IT service provider Synstar for EUR 293.3 million. Synstar has more than 1500 customers and is active in Europe. The company offers IT infrastructure management services to customers and has offices in Great Britain, Germany, Belgium, Spain, Luxembourg, Ireland and the Netherlands. Today the company is called Hewlett-Packard CDS and is also responsible for HP device customer service in field service and on-site customer service.

In January 2005, controversial CEO Carly Fiorina was fired with a $ 21 million severance payment and replaced by Mark Hurd . On September 5, Newsweek released information that then-CEO Patricia C. Dunn had hired a group of experts to spy on its employees and journalists (she was fired a year later).

In 2006, HP relocated its service activities to low-wage countries (for example the German-speaking customer service center in Sofia ), regardless of language and intercultural challenges, as part of nearshoring . In Germany around 1200 employees were affected by the downsizing. Almost 15,000 employees worldwide lost their jobs as part of further restructuring measures.

In 2008, HP acquired EDS for $ 13.9 billion. Together, the service division of both companies had 210,000 employees worldwide at the time of purchase.

2010 HP acquired the network specialist 3Com for 2.7 billion US dollars . On April 12, 2010, HP completed the 3Com acquisition. On April 29, 2010, HP acquired smartphone maker Palm for $ 1.2 billion ($ 5.70 per share). Palm had been looking for an investor for a long time to get its ailing financial situation under control. HP justified this step with the possibility to use Palms operating system platform " WebOS ". In November 2010, Jon Rubinstein, head of the "Palm Global Business Unit" at HP, announced that HP would develop smartphones, tablets and printers with webOS in the future. However, HP announced the cessation of all WebOS activities in August 2011.

In August 2010, CEO Hurd had to leave the company after 5 successful years due to a harassment and expense report scandal. Temporary CEO from August 6, 2010 until the end of October 2010 was Cathie Lesjak. On November 1, 2010, she was replaced by Léo Apotheker , formerly CEO at SAP .

In February 2011, the company announced the acquisition of the business intelligence software manufacturer Vertica for an undisclosed sum with the aim of gaining a foothold in the market for analytical information systems .

In August 2011, Hewlett-Packard announced a radical change in strategy: the tablet PCs should be discontinued and the PC business should be sold. Analogous to the strategy of IBM , the group wants to concentrate on software, services and servers in the future.

On September 22, 2011, the company separated from CEO Léo Apotheker with immediate effect. Meg Whitman has been named successor as CEO and President. It reversed the decision to give up the PC business. In May 2012, HP announced a multi-year reorganization with 34,000 job cuts. The announced job cuts were revised upwards to 45,000 to 50,000 two years later.

To September 23, 2013 HP retired from the Dow Jones - share index on the New York Stock Exchange from.

At the beginning of 2014 the Rüsselsheim location with 1100 employees was closed.

In October 2014, HP confirmed reports about the split-up of the company: In October 2015, HP was split into the companies HP Inc. (printers and PCs) and Hewlett Packard Enterprise (HPE) (server, storage and network). HP resumed the strategy that had led to the separation of CEO Léo Apotheker in September 2011 and was revised by the later CEO Meg Whitman. The split was completed on November 1, 2015.

On November 24th, 2015 the last quarterly figures of the Hewlett-Packard Company were presented. Because, according to the quarterly report, the prospects of HPE were better than that of HP Inc., shares of HP Inc. fell 7 percent, while shares of HPE rose 2 percent.

In November 2017, after several months of negotiations and restructuring, HP Inc. took over the printer segment from Samsung and is aiming for increased sales with the associated technologies and patents that can be used.

With around 55,000 employees in more than 170 countries and sales of 58.5 billion US dollars (fiscal year 2018), HP Inc. is one of the leading PC and printer manufacturers worldwide. The first Chief Executive Officer (CEO) of HP Inc. was Dion Weisler, and he was succeeded on November 1, 2019 by the previous Head of Image Processing, Printers and Services, Enrique J. Lores.

In November 2019, printer and copier manufacturer Xerox announced a takeover offer for HP Inc. In April 2020, Xerox decided not to take over HP Inc. after all.

As of early 2020, almost 87% of HP Inc. shareholders are institutional investors . The following investors hold the largest shares:

A software update that was automatically installed by the customer in August 2016 identified color cartridges from third-party suppliers based on their chips and blocked any printing. According to HP, the update was intended to protect the innovative product range and its intellectual property . The function for the update installed in August 2016 was introduced in 2015 for the Officejet, Officejet Pro and Officejet ProX models. After protests by large online shops, third-party providers and the establishment of a foundation for damaged customers, the problem was resolved by another update from HP. In particular, the legal side is not clearly clarified, because the question arises as to which rights are transferred to the buyer with the purchase of a firmware license and which are not.

On April 9, 2014, HP completed administrative proceedings in the Securities and Exchange Commission and agreed to an order confirming that HP had violated the Foreign Corrupt Practices Act (FCPA) as HP subsidiaries in Russia, Poland and Mexico Made improper payments to government officials in order to obtain them or to keep lucrative public contracts.