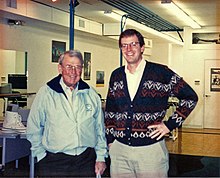 In 1939 he founded their company with David Packard in Packard's garage for $ 538. Packard excelled as an administrator, while Hewlett contributed many technical innovations. Hewlett-Packard grew to become the world's largest manufacturer of electronic test and measurement instruments. The company later became a major manufacturer of pocket calculators, personal computers, laser printers, and inkjet printers.

Hewlett was President from 1964 to 1977 and CEO of Hewlett-Packard from 1968 to 1977 , after which he was replaced by John A. Young . He remained chairman of the Executive Committee until 1983 and then served as its deputy chairman until 1987.

In 1970 Hewlett was elected to the American Academy of Arts and Sciences , in 1977 to the National Academy of Sciences . In 1995 he received the Lifetime Achievement Award of the Lemelson-MIT Prize and in 1997 the Chairman's Medal of the Heinz Awards .