The title of this article is ambiguous. Further meanings are listed under samsara (disambiguation) . 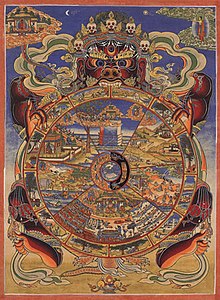 Cycle of life in suffering samsara

Samsara ( Sanskrit , n., संसार, saṃsāra ; Pali : saṃsāra ; literally: "constant wandering") is the name for the perpetual cycle of being, the cycle of growth and decay or the cycle of rebirths in the Indian religions Buddhism , Jainism and partial currents of Hinduism .

This cycle is considered painful in some Indian religions (see Dukkha / Leiden ). The breakout from this ominous cycle happens on the way of letting go of all attachments, desires and wishes as well as through knowledge. The state of "redemption" (and, according to some variants, of eternal bliss, see redemption ) is reached, which the Hindus call moksha and the Buddhists nirvana .

Samsara is shown very clearly in the so-called wheel of life , which is widespread in Tibetan Buddhism . In the center, around the hub, the driving forces of the wheel are shown, the three poisons of the spirit : greed, hatred and delusion, as a rooster, snake and pig. The rooster symbolizes greed, the snake hatred and the pig ignorance. Subsequent to this, the result of actions based on the spiritual poisons is shown in black as the descending path, the path of overcoming these spiritual poisons is shown in white as the ascending path. These paths lead to the six possible rebirth areas shown on the next level: White (from top to bottom): Gods ( Devas or Suras ), Asuras , people. Black (from top to bottom): animals, hungry spirits (Pretas), hell beings . The extent of suffering increases continuously from the god realm down to the extreme experiences of suffering and the various hell areas (cold, hot, great hells).

However, being a human is best for attaining nirvana , since as a human one does not experience excessive suffering or excessive happiness. In a form of existence as God, the feeling of happiness is so strong that one will see no reason to break out of this existence into samsara. In a form of existence as an animal one does not have the necessary understanding to break out of samsara, and in a form of existence as a hungry ghost or hell being one has a difficult time because of the predominant suffering. In the outer area, the twelve links of dependent arising are depicted, where ignorance (Sanskrit "avidya", Pali "avijja") is at the beginning / end of the entire cycle.