Flader is a redirect to this article. For the German communication scientist, see Dieter Flader . 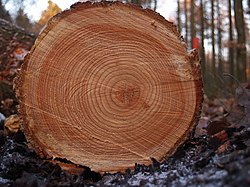 Annual rings on a trunk felled in 2005

Formation of the first annual ring: the cambium ring (black) separates early wood (red-brown) on the inside, then late wood (dark brown), and bast (gray) continuously on the outside. The cambium ring increases in size.

Annual rings of a spruce trunk

Annual rings tell the story of this tree until 2006 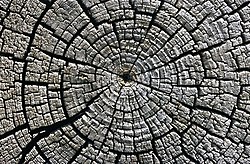 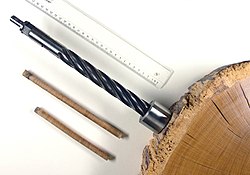 The ring- shaped grain of the wood of a perennial plant , in particular a tree , which is visible in cross-section, is referred to as the annual ring or tree ring , formerly also a wooden ring . Annual rings only arise where the climatic conditions lead to a temporary rest in the dividing activity of the cambium . The reason for this can be winter in the seasonal climate or dry seasons in the subtropical and tropical regions, which can also follow every six months (six-month rings ). As wrong year rings referred to considerable fluctuations in the course of wood formation (density variations) that are not connected to a Kambialruhe.

An annual ring reflects the different development phases in a vegetation period.

After the rest phase in winter (or dry season), the mobilization phase consumes nutrients that were applied before the rest phase. This is followed by the growth phase in which the so-called early wood arises. An often lighter growth zone is formed from relatively loose tissue, which enables the tree to quickly transport water and minerals from the roots to the crown in order to ensure leaf growth and flower formation. The cells in the early wood are thin-walled and large-lumen . This means that they are not very strong mechanically. In the subsequent deposition phase , thick-walled, small-lumen wood cells are created, which form significantly denser tissue and mainly take on strengthening tasks. The often darker color of this latewood is caused by the higher proportion of lignin in the cell walls.

The better the climatic conditions within a vegetation period, the greater the wood growth and thus the width of the annual ring.

There are differences in the proportion of early and late wood between hardwood and coniferous wood.

Since climate fluctuations not only affect a single tree, but also its neighbors, all trees in a region form a characteristic tree ring pattern. On the one hand, the climate can be reconstructed over centuries and, on the other hand, the age of archaeological finds can be determined with the help of the grain of wood residues ( dendrochronology ).

The age of a tree that has not been felled can be determined with the help of a drill core or by measuring the drilling resistance using a resistograph . Both methods allow the annual rings to be counted. In the case of conifers, it is also possible to count the annual shoots using the number of whorls on the trunk.

An estimate of the age based on the tree diameter is very imprecise, since the increase depends on genetic factors, the weather, the site conditions and the position in the stand. Some oak species, willows, poplars and plane trees can show growth rates of more than 10 mm / year, yew and dwarf trees well below 4 mm / year.