Anton Karl Karas (born July 7, 1906 in Vienna ; † January 10, 1985 in the 19th district of Döbling in Vienna ) was an Austrian zither player , composer and innkeeper. His most successful composition was the Harry Lime theme (English: The Third Man Theme ) for Carol Reed's film The Third Man .

Karas was born as a typical child of the working class at Marchfeldstrasse 17 in the Vienna district of Zwischenbrücken . Until he was 19 he lived at Leystraße 46, the part of Zwischenbrücken that had been separated from Leopoldstadt as Brigittenau in 1900 (today the 20th district of Vienna). His parents were factory workers Karl Josef Karas (1883–1959) and Theresia Streckel (1884–1946), who only married a year after his birth. He had four siblings (Karl, Friedrich, Hermine and Maria).

Karas' musical talent was recognized in elementary school, but his career aspiration as Kapellmeister could not be financed. Instead, the father decided to let his son complete an apprenticeship as a tool fitter from 1920 , but financed him, like his other children, music lessons. The five music-making children were well known and loved in the area.

In addition to his apprenticeship, Anton Karas attended evening courses at the private Pollux music school. After the journeyman's examination in 1924, he had a brief job at Fross-Büssing KG in vehicle construction, but was dismissed in January 1925 “for lack of work”. However, since he had started to study at the Vienna Music Academy in 1924 (which he continued to do until 1928), this problem does not seem to have bothered him: he began to play the zither in Sieveringen Heurigenlokalen as a partner of the then highly famous Adolf Schneer , and his income was soon higher than that of his father.

On December 14, 1930, less than three months before his daughter was born, he married Katharina Perger (1901–1986). From 1939 to 1945 he was drafted into the air defense of the Wehrmacht and temporarily used in Russia. He always had a zither with him, as evidenced, among other things, by photos of him playing in front of officers. He is said to have lost several instruments in the course of war, but he always knew how to get replacements.

In 1948 he was discovered by the English film director Carol Reed , who was looking for music to accompany his film The Third Man, set in Vienna . With a contract that was well paid for at the time - Karas received a weekly fee of £ 30 plus £ 20 pocket money and all other expenses - he went to London in 1949 to do all of the film music in the London film studios of the brothers Alexander and Zoltan Korda to accomplish. This created the world-famous Harry Lime theme , named after the film character Harry Lime , which contributed significantly to the legendary success of this film. Other musical creations that Karas contributed to this film are usually hardly noticed. Karas' workload is given as "up to 14 hours a day" for the twelve weeks that he was employed there. The homesick Viennese often wanted to get out of the contract and travel home, which Reed always managed to prevent. Karas later formulated that occasionally "to have been kept like a slave".

The catchy melody was a success, and the interpreter and composer, hitherto completely unknown outside of Vienna, became a celebrated musician. Just three weeks after the film was released, 100,000 records had been sold; in anglophone countries the film was sometimes just called The Zither Film . In the US, Karas was the first Austrian to the hit list led . He went on several longer tours, including in front of Princess Margaret , Queen Juliana , members of the Swedish royal family, Pope Pius XII. and the Japanese Emperor Hirohito , and according to his own account, always suffered from homesickness. After his first major tour of Europe and the USA, he was greeted at the airport in July 1950 by Chancellor Leopold Figl and other members of the government.

From the income from the sale of the records and the high royalties for the Harry Lime theme, Karas opened the luxury wine tavern Zum third Mann in Sievering in 1954. Although it became a "compulsory" item on the program for international stars and an international tourist attraction, it did not satisfy the artist Karas : On the occasion of his retirement in 1966, he gave up. He later noted that he would have preferred to appear in ordinary pubs in front of ordinary Viennese audiences who understood him, his language and his music. After his death, Karas was buried in an honorary grave in the Sieveringen cemetery (group 28, row 9, number 9/10). 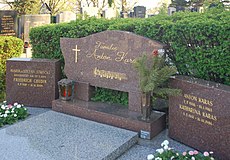 Grave site in the Sieveringen cemetery