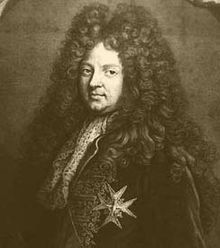 He was the son of Foreign Minister Charles Colbert and was already an ambitious law student before he assisted his father in his office. The young Colbert proved to be talented in the field of diplomacy, which is why the king of him the title of marquis de Torcy granted and already in 1689 the projected benefit zusprach to the office of his father, which proved to be a happy decision.

After the death of his father, Torcy took over his position as planned and was the spiritual father of the peace treaties of Rijswijk (1697), Utrecht (1713) and Rastatt (1714). His main interest was the professionalization of diplomacy . To this end, he founded an académie politique , with the aim of training technical specialists. This institution did not survive the death of Louis XIV, but the establishment of a central archive for foreign relations (1710) was a success that is invaluable for historians to this day.

Although Colbert de Torcy was an expert with great competence and had enjoyed the unlimited trust of the king, the regent Philipp d'Orléans dismissed him after the death of Louis XIV (1715) and Colbert withdrew from politics . During his “retirement” he became a member of the Salons Entresol , where he occasionally discussed Fleury's foreign policy with contemporaries . This mostly took place in the abbé Alary apartments on Place Vendôme .

The architect Germain Boffrand built numerous city palaces in the Parisian Faubourg Saint-Honoré, one of which Torcy bought in 1715 and from then on used it as a retreat under the name of Hôtel de Torcy . Here Colbert de Torcy acquired an extensive art collection and wrote his Mémoirs pour servir à l'histoire des négotiations depuis le Traité de Riswick jusqu'à la Paix d'Utrecht . The palace is now known as the Hôtel de Beauharnais and houses the German embassy in Paris.

In 1718 he became an honorary member of the Académie royale des sciences .