Norwich City (officially: Norwich City Football Club ) - also known as The Canaries ( German  Die Kanarienvögel ) - is a football club from the English city ​​of Norwich . The Norwich Canary, once the domestic animal of the weavers' guild in the eastern English city, is now the mascot of the Norwich City Football Club. The club was founded in 1902. The greatest successes in the club's history include winning the League Cup in 1962 and 1985 and a third place in the newly introduced Premier League in 1992/93 . The club will play in the second-rate EFL Championship in the 2020/21 season . He plays his home games in the 27,033-seat stadium on Carrow Road .

The club was founded in 1902 and played on Newmarket Road. In 1908 the club moved to Rosary Road. This stadium was called "The Nest". In 1935, due to the increasing number of spectators, they moved into the stadium on Carrow Road, where the club is still based today. There the club reached on March 30, 1963 in the FA Cup against Leicester City with 43,984 spectators also its best attendance to date.

Norwich spent the first few years of the club's history in lower class leagues before entering the Football League in 1920 after the introduction of the Third Division . In 1934 they were promoted to the Second Division , in which the team played until relegation in 1939. After the game was interrupted by World War II, City started in the Third Division and remained in this division until it was promoted to the second division again in the 1959/60 season. In the FA Cup 1958/59, the third division team made it to the semi-finals after the team had defeated Manchester United in the third round and Tottenham Hotspur in the fifth round . The club secured its first title in the club’s history in the 1961/62 League Cup . After a 3-0 away win at Rochdale AFC , Norwich won the second leg at home 1-0 to win the League Cup.

Twelve years later, the club managed the first promotion to the Football League First Division under coach Ron Saunders . City had previously secured the second division championship one point ahead of Birmingham City . The first season in the First Division 1972/73 finished Norwich in twentieth place in the table and secured relegation only because of two points ahead of relegated Crystal Palace . In the same year, the canaries moved into a final at Wembley for the first time . However , the team lost the final game in the League Cup 1972/73 with 0: 1 against Tottenham Hotspur. In the 1973/74 season, however , the club had to relegate back from the first division in the second season as bottom of the table. With a third place in 1974/75 City managed to return directly to the House of Lords of English football, and Norwich moved into a league cup final for the third time. There, however, the team had to accept a defeat for the second time, this time 1-0 against the Aston Villa coached by Ron Saunders (until 1973 at Norwich as coach) . In return, the promoted team in the First Division in 1975/76 was able to confidently stay in league as tenth. In the following four years, the team found themselves under coach John Bond in the midfield or lower third of the table.

In the first half of the First Division 1980/81 coach John Bond left the club on October 31, 1980 and moved to league rivals Manchester City . A day later, the previous assistant coach Ken Brown took over the coaching post in Norwich. At the end of the season, however, the club rose again to the second division after six years of first class. As seven years earlier, the club managed to get promoted again by taking third place and secured relegation in the 1982/83 season as fourteenth. Striker John Deehan scored twenty league goals, placing third on the top scorer list with John Wark of Ipswich Town and Bob Latchford of Swansea City . 1984/85 City rose again from the first division. Coach Ken Brown and his team around Chris Woods , Dave Watson , Steve Bruce and Mick Channon won the second title in the 1985 league cup final after 1962 . In the final, Norwich defeated the later relegated AFC Sunderland 1-0. For the third time in a row City reached direct resurgence in 1985/86, this time by winning the second division championship before Charlton Athletic . In the First Division 1986/87 the promoted team finished fifth at the end of the season and thus achieved the best placement in the club's history. However, due to the international ban on all English football teams as a result of the Heysel disaster , the club missed its first start in an international competition. Another increase in the league took place two years later under the new coach Dave Stringer in the 1988/89 season as fourth. Again, the club could not start in the UEFA Cup due to the international suspension . The team also played successfully in the FA Cup in 1988/89 and only failed in the semifinals with 0: 1 at Everton .

In the 1991/92 season a mere eighteenth place with three points ahead of relegated Luton Town was enough for relegation. In the FA Cup 1991/92 the team reached the semi-finals and failed there with 0-1 at AFC Sunderland . After the bad position in the previous year, the season in the newly introduced Premier League 1992/93 was all the more surprising. The team of the Welsh coach Mike Walker led the table for a long time and at the end of the season reached third place behind champions Manchester United and second Aston Villa , the best league placement in the club's history to this day. Mark Robins was the team's top scorer with fifteen league goals. With this success, City started in the 1993/94 UEFA Cup for the first time in the European Cup and, after successes over Vitesse Arnheim (3-0 and 0-0) and FC Bayern Munich (2-1 and 1-1), reached the third round. There was against the eventual title holder Inter Milan with two 0-1 defeats. Coach Mike Walker left Norwich on January 6, 1994 to become the new coach of Everton FC . With the new coach and former player John Deehan , the club finished the Premier League in 1993/94 only in twelfth place. The 21-year-old attacker Chris Sutton managed a very good playing time with twenty-five league goals. In the summer of 1994, however, he left the club and moved to the Blackburn Rovers . In the Premier League 1994/95 Norwich rose as third from bottom only two years after third place in the opening season from the first division.

At the beginning of the 1995/96 season, the Northern Irishman Martin O'Neill took over the coaching post. In December 1995, however, he left the club after differences with the board. Under the successor Gary Megson , Norwich missed the rise as well as 1997 and 1998 under the returned successful coach from 1993, Mike Walker. He was released on April 30, 1998 before the end of the season. At the beginning of the 1998/99 season, the board signed Bruce Rioch as the new coach. Even under the Scot, Norwich clearly missed the return to the Premier League in ninth place. After another unsatisfactory 1999/00 season, Rioch was also released on March 13, 2000. Only under Nigel Worthington , who has been in office since December 2000 , City reached the play-offs with a sixth place in the 2001/02 season . After a first-round success over Wolverhampton Wanderers , Norwich lost the final against Birmingham City on penalties. Two years later , Worthington led the club to the championship in the second division and thus made promotion to the first division after nine years.

The return to the Premier League 2004/05 was not permanent, rather the direct relegation followed as the table penultimate. After a ninth place in the Football League Championship 2005/06 and a false start in the 2006/07 season , Nigel Worthington was released on October 1, 2006 after just under six years in Norwich. Almost exactly a year later, the board also parted with Worthington's successor Peter Grant , under whom the sporting situation had not improved. After nearly reached relegation in the 2007/08 season Norwich rose 2008/09 as third from bottom for the first time in 49 years back in the third division from.

After two games in the 2009/10 season and a 1: 7 opening defeat, coach Bryan Gunn was dismissed on August 13, 2009 and Paul Lambert was hired five days later as the new coach. With him Norwich won the championship in Football League One 2009/10 and returned to the second division after a year. The newcomer was able to maintain his good form in the Football League Championship 2010/11 and managed to march straight through to the first division as runner-up behind the Queens Park Rangers . In the 2011/12 Premier League , the team confidently secured relegation as twelfth in the table, but had to cope with the departure of successful coach Paul Lambert, who moved to league rivals Aston Villa after the end of the season . Chris Hughton was introduced as his successor on June 7, 2012 . At the end of the 2013/14 season, the team relegated to the second division, but only one year later they were able to secure direct promotion.

Promotion to the Premier League 2019

At the end of April 2019, Norwich City and German coach Daniel Farke made it to the Premier League after three years in the second division, one matchday before the end of the season of the second-rate championship.

One of the most pronounced rivalries in English football is between Norwich City and Ipswich Town . The win in the East Anglian derby is therefore considered particularly prestigious.

British comedian, screenwriter and director Stephen Fry sat on the club's board of directors from 2010 to 2016 . The largest shareholder, along with her husband, is the cook and cookbook author Delia Smith, who is very successful in England . 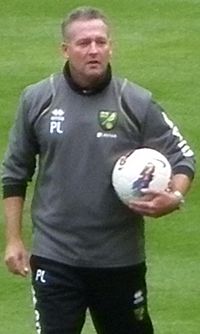 Player of the year

Since 1967, Norwich City's Best Player of the Year has been voted annually by fans.

Clubs in the English EFL Championship in the 2020/21 season