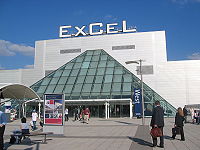 The Exhibition Center London , or ExCeL for short, is an exhibition center that opened in November 2000 in the Royal Docks , part of the Docklands in east London . The name is made up of Ex hibition, Ce ntre and L ondon.

The ExCeL site is over 400,000 m² and is located on the north quay of the Royal Victoria Dock . Although the docks were closed to merchant shipping in 1981, they are still accessible by ship. This is especially useful when the London Boat Show is taking place, the UK's largest boat show . The exhibition hall itself consists of two 32,500 m² halls. These can in turn be broken down into smaller units. ExCeL can be reached with the Docklands Light Railway ( Custom House station ). The London City Airport is located about half a kilometer to the east on the other side of the dock.

For the 2012 Olympic Games and the 2012 Paralympics , the ExCeL was divided into four sports halls with a capacity for 6,000 to 10,000 spectators. During the Olympic Games, competitions in boxing , judo , taekwondo , table tennis , fencing , weightlifting and wrestling took place here, as well as competitions in wheelchair fencing , table tennis, judo, powerlifting , sitting volleyball and boccia at the Paralympics .