The title of this article is ambiguous. Further meanings are listed under Wrexham (disambiguation) .

Wrexham ( Welsh Wrecsam ) is a university town and principal area with the status of a county borough in north-east Wales , near the border with the English county of Cheshire . The core city of Wrexham has a population of around 43,000, making it the largest city in North Wales. The County Borough of Wrexham has a total population of 134,800 residents (2011). Wrexham is home to Glyndŵr University .

Prehistoric times to the Roman conquest of Britain

The area around Wrexham was first settled in prehistoric times. Remnants of settlements from ancient Rome were found outside the city center during the establishment of the Plas Coch Retail Park.

Wrexham is not mentioned in the Domesday Book ; the first documented evidence is found in 1161, when a Norman moth was in Wristlesham . Because it was east of Offa's Dyke , settlement in the Anglo-Saxon period is likely.

The town became part of the same with the creation of Denbighshire in 1536. The city itself was divided into two townships : Wrexham Regis (which was controlled by the Crown) and Wrexham Abbot (the older districts that originally belonged to the Valle Crucis Abbey near Llangollen ).

During the English Civil War , Wrexham sided with the Cavaliers (royalists). Most of the Welsh nobility supported the king, although the large landowner Sir Thomas Myddelton, Lord of Chirk Castle , supported Parliament . Wrexham became the most important town in the area during this time and gained considerable wealth from its markets.

Wrexham used to be one of the most industrialized areas in Wales . One of the most important industries was brewing, with numerous larger breweries in the town and a few smaller breweries in the town's inns and restaurants. Some of the famous old breweries were Albion, Cambrian, Eagle, Island Green, Soames, and Willow. The best known, however, was the Wrexham Lager Brewery , which was built on Central Road between 1881 and 1882. This brewery was the first in the UK to produce lager . Another larger producer, Border Breweries, was created in 1931 from a merger of numerous smaller breweries. Today all breweries, as far as they were operated commercially, have been shut down.

Bricks were produced in Abenbury, on the outskirts of Wrexham. The brick factory was on either side of Abenbury Road.

Although coal mining was an important industry in the areas and provided work for a large number of residents, most of the mines were located far out of town. These mines are also all closed today.

As a legacy of Wrexham's industrial past, the large and winding railway network has been preserved. Most of this network belonged to the Wrexham and Minera Branch , which served the steel mills of Brymbo Steel Mill and Minera Limeworks . The railway network was given up in the 1960s (including the Minera Branch in the early 1970s). Wrexham has experienced an economic decline since that time: the last steel mills closed in the 1980s after the brickworks and coal mines had already closed.

Since the 1980s and 1990s, the state has been working with the Welsh Development Agency (WDA), an agency for the promotion of structurally weak areas in Wales, to improve the situation of Wrexham: the A483 road leads past Wrexham and thus connects the city with the centers Chester and Shrewsbury , which in turn are connected to the metropolises of Manchester and Liverpool . A lot of money was invested in massive economic development and the restoration of the ecological environment that had suffered from coal mining. Larger retail chains settled in Wrexham. In the meantime, the Wrexham Industrial Estate has also managed to locate global companies such as Kellogg's , Duracell and Pirelli in the Wrexham area. A few other factories produce for the Sharp or Brother brands .

After the economic crisis, Wrexham experienced a renewed economic boom.

Unrest rocked the city in June 2003, with a large number of incendiary bombs being thrown at an asylum seekers' home.

Wrexham is now the largest settlement in North Wales and has applied for city status several times. In 2002, Elizabeth II's golden jubilee year , the city applied with the cities of Aberystwyth , Machynlleth , Newtown , Newport and St Asaph . Eventually Newport was preferred to Wrexham, with Newport's population three times that of the Wrexhams. The Wrexham County Borough is one of the smallest of its kind in northern Wales. Although the area should be enlarged several times, other cities like Llangollen have rejected it. There are rivalries between cities, especially with Chester .

Wrexham hosted the (national) Eisteddfod (the Welsh cultural festival) in 1888, 1912, 1933 and 1977. An unofficial National Eisteddfod was held in 1876. Wrexham has one theater, the Grove Park Theater.

The local music scene is centered around The Old Swan and the larger Central Station. The Old Swan is at the end of Abbott Street in central Wrexham.

The Wrexham Mail is a free newspaper. There is also the Wrexham Evening Leader and the weekly Wrexham Leader, also known as the "Big Leader". Two local radio stations, Marcher Sound and Classic Gold Marcher , broadcast in the city area. BBC Wales, ITV Wales and S4C have correspondents and offices in the city. 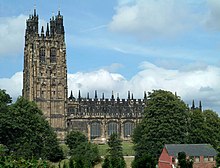 St Giles Church is the most important church in Wrexham and has a brightly painted ceiling depicting numerous flying angels making music. One window was designed by the artist Edward Burne-Jones . In the cemetery is the grave of Elihu Yale , the founder of Yale University in New Haven , Connecticut in the United States . Yale College Wrexham is named after him. The Tower of St Giles is considered one of the Seven Wonders of Wales . The tower of Yale University is said to be modeled on him. The Roman Catholic Cathedral of Our Caring Lady is located on Regent Street. It is the diocesan church of the Bishop of Wrexham, whose diocese has its seat here and extends over the whole of north Wales (see Diocese of Wrexham ). The diocese belongs to the Archdiocese of Cardiff . The principal Methodist Church is in Brynyffynon on Regent Street. Until the 1970s, the free-church churches and chapels were far more popular than the Anglican churches.

The church, named after Saint Mark, towered over St Giles, but eventually had to be demolished because of the fragile foundations. A parking garage (called "St Mark's") was eventually built in their place.

Wrexham is a Labor stronghold .

The Wrexham County Borough is a partner circle of the Märkischer Kreis (NRW).