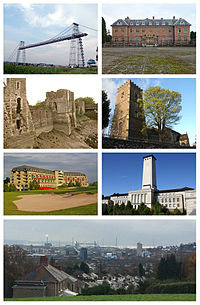 Newport ( Welsh : Casnewydd ) is a port town on the Usk River near the Bristol Channel in South Wales , United Kingdom . Newport is about 12 miles east of Cardiff and is the largest city in the historic counties of Gwent and Monmouthshire . It is the third largest city in Wales and one of Wales' 22 principal areas . The English name of the city translated means New Harbor , the Welsh New Castle . Newport has the status of a city .

In the year 75 a Roman legion camp was built in Caerleon , which is now part of Newport , about 3 kilometers upstream . The St. Woolos Cathedral can be traced back to the 9th century.

The town grew out of a settlement around the Norman moth Newport Castle , built in 1090, and was first mentioned in 1126. In 1314 Newport received city rights.

In the 19th century, South Wales became one of Britain's most important industrial regions. Newport became the main port of export for the Eastern Valleys and grew into one of the largest cities in Wales. The city was a center of the Chartist movement. The march on the Westgate Hotel led by John Frost in 1839 became the outcome of an armed uprising.

In 1899 the British Miners Union was formed in Newport .

While Newport was long characterized by shipbuilding, coal handling and the iron, steel and rubber industries, trade and administration dominate today. In particular, Newport hosts much of the administration of the UK Passport Office , the UK Office for National Statistics and the UK Patent Office .

Other major employers are Airbus Defense & Space, a subsidiary of Lloyds TSB , Panasonic Manufacturing UK , the headquarters of GoCompare.com, an Internet comparison portal, and Admiral Insurance .

Gondola of the "Transporter Bridge" over the Usk

The 17th century Tredegar House is one of the most historically significant mansions in Great Britain . Until 1951 it was the ancestral home of the powerful Welsh Morgan family.

Another attraction is the cathedral of the Anglican Church St. Woolos Cathedral , which received this title 1949th The first church on this site was built around the year 500 and destroyed in the 11th century. It was rebuilt under the rule of the Normans and destroyed again in the 17th century. The last reconstruction took place in the 19th and 20th centuries.

Newport is home to the largest surviving transporter bridge , the Transporter Bridge dating back to 1906. She was decommissioned from 2007 to 2010 for renovation purposes.

The Welsh national sport of rugby is represented by the Newport Gwent Dragons , who compete in the Pro14 international professional league .

From 1987 to 1991 Newport was the venue for the Welsh Professional Championship in snooker , the tournaments were held at the Newport Center . From 1992 to 1998 and then again from 2005 to 2014 the Welsh Open , a snooker ranking tournament, was held there.

There is also a partnership with