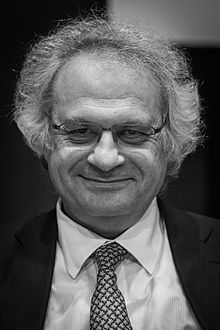 Amin Maalouf's origins reflect the complicated conditions in Lebanon. His mother came from a Maronite family, the father from a Melkite family with connections to the important Arab tribe of the Maalouf . There was also a Presbyterian preacher and a Catholic priest among his ancestors .

He grew up in Lebanon, attended Notre-Dame de Jamhour, a Jesuit school , and studied sociology at the Université Saint-Joseph . He then worked as a journalist and was an editor for the Arabic-language daily An-Nahar . He emigrated at the beginning of the Lebanese civil war in 1976 over Cyprus to Paris , where he has lived ever since. In the 1970s and 1980s he was editor-in-chief of the magazine Jeune Afrique , wrote fiction on the side and traveled as a journalist to dozens of countries, for example to report on Vietnam, India or the Iraq-Iran war . In 1985 Maalouf decided to devote his time as a freelance writer only to writing.

His novels often deal with historical subjects. In 1993 he received the Prix ​​Goncourt for his novel Der Felsen des Tanios .

The central theme is the clash of different religions and ethnicities, such as the Druze and Christians in Lebanon in the mid- 19th century in The Rock of Tanios , where the country's heterogeneous groups got caught up in the imperial rivalries between Great Britain and France over the Levant (see also History of Lebanon and civil war in the Lebanon Mountains ).

In his book Les croisades vues par les Arabes (published in German under the title “The Holy War of the Barbarians”) Maalouf tries to describe the Crusades from the perspective of the Arabs . The book is not a novel, but a non-fiction book based on research in contemporary Arabic sources and sheds a completely new light on the events of the time for the European reader. Unlike Francesco Gabrieli, this is not a collection of sources, but rather secondary literature that offers references, but not in the form of footnotes.

His novel Die Häfen der Levante tells the biography of a man of Armenian-Turkish descent, born in Lebanon, who emigrated to France and fought in the Resistance , fell in love with a Jewish woman from Austria who emigrated to Palestine. He later returned to Lebanon, where he witnessed and fell victim to the Middle East conflict.

This novel was also featured in a TV feature on Bayerischer Rundfunk .

His novel The Trail of the Patriarch. The story of a family does not actually tell the story of the highly respected Maalouf family, but the story of the research by the grandson, who backs up all statements with letters, diaries and other written documents. It cleverly succeeds in showing the complexity of different people in the grandfather's generation without the author judging or even condemning. In this way, a personal family history becomes transparent at some point. But then there appear general human questions and basic patterns of Lebanese society. Particularly worthy of discussion and noteworthy is the devastating conclusion that the grandmother draws at the end of the book about the influence of religion: If religion is missing in a family, it is a tragedy, but where there is too much religion, it is no better.

The historical novel Leo Africanus is about a learned Muslim who falls into the hands of Christians and comes to the papal court as a slave. The main character of the novel is borrowed from a historical person (early 16th century). In The Century After Beatrice (also the return of the scarab ), Maalouf takes up a sociological phenomenon - the preference for male offspring in many third world countries. Using a science fiction idea (a drug that prevents the birth of girls), he extrapolates this worrying development into the future and describes the end of the world as we know it in a melancholy catastrophe novel.

“The fact that this whole unbelievable, but unfortunately not impossible story touches the reader is due to Maalouf's skill in telling it all from the point of view of a man to whom his daughter is more than anything - the said Béatrice of the title. The pace of the narrative is slow, that of a scientist who is carefully weighing his words (the first-person narrator is an entomologist who prefers all articulated animals to all the intricacies of human life) ... Statistics have been known from India and China for a long time who can clearly see that the desire for sons has already dramatically disturbed the demographic balance. The invention of something like “substance” would only speed up these processes. In this respect, Maalouf makes a more important contribution to the future with his little novel, which is wonderful despite all the catastrophic scenarios, than all the self-proclaimed futurologists with their internet fantasies and genetic engineering pissing off. Especially since his book - to at least mention that - is a very nice example of the fact that you can write a thematically and literarily demanding SF novel without having to make qualitative concessions in terms of character design, composition or language. "

- Karsten Kruschel on the first century after Beatrice