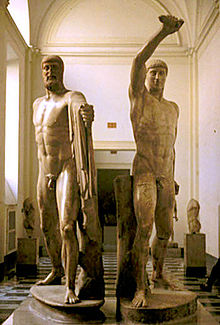 Group of statues of the tyrannicide

An ancient group of statues is referred to as a tyrant murderer (also called a tyrant slayer), which was built in 477/76 BC. On the Agora of Athens and represents the two murderers of tyrants Harmodios and Aristogeiton , who 514 BC. BC Hipparchus , the brother of the tyrant Hippias , had killed. The bronze group was created in the workshop of the sculptors Kritios and Nesiotes and is considered an important work of the “ strict style ” of Greek art.

Already after the expulsion of Hippias in 510 BC BC statues of the assassins killed immediately after the attack were placed on the agora. This first group of tyrant murderers by the sculptor Antenor was founded in 480 BC. Brought to Susa by the Persian king Xerxes during the temporary occupation of Athens . After the conquest of the Persian Empire by Alexander the Great , he had them brought back to Athens.

The new group of statues created after the victory of the Greeks in the Persian Wars shows Harmodios and Aristogeiton performing the assassination attempt. They were considered to be the pioneers of Attic democracy , although the ancient historian Thucydides already linked their actions with private motives. Harmodios and Aristogeiton were therefore a pederastic couple who defended themselves against the stalkings of Hipparchus. The bearded Aristogeiton protects the younger Harmodios with his left arm and the cloak over it, while he starts to strike with the sword with his right hand. Harmodios, on the other hand, takes a swing. Both flanks are completely unprotected in their wedge-shaped forward movement and show a different treatment of the muscles: supple in Harmodios, sinewy and stiffer in Aristogeiton.

The original groups have not survived, but eight fragments from Roman copies. An almost complete marble copy of the group of Kritios and Nesiotes is in the National Archaeological Museum of Naples under inv. 906. Although the appearance of the group is also known from depictions on Attic vases, coins and reliefs, the composition is controversial. Maybe they were back to back. The height is 1.85 meters above the base. Fragments of plaster casts such as those from Baiae have also survived.