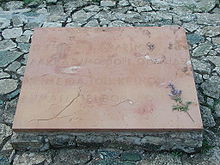 Modern plaque: Wanderer, if you come to Sparta , then report that you saw us lying here, just as the law ordered

Leonidas was the son of Anaxandridas II and his first wife. His younger brother Kleombrotos is also referred to by some authors as his twin brother. Since his half-brother Kleomenes I died without male descendants and Leonida's older brother Dorieus had also died, the rule fell to him. He married Cleomenes' daughter Gorgo and had a son with her, Pleistarchus , who succeeded him. Simultaneously with him the Eurypontid Leotychidas II ruled from the other Spartan royal house.

Leonidas achieved historical importance mainly through his behavior as a general of the Hellenic League in the battle of Thermopylae in 480 BC. Chr. In this battle, a Greek army blocked (about 5,200 men, including 300 Spartans ) to Thermopylae to the Persian Empire army with a total strength of 50,000 to 100,000 men under Xerxes I stopped. At first they were able to withstand the Persians, who had an advantage due to the narrow passage. The Persians suffered heavy losses, while there were hardly any failures on the Greek side. Before they were encircled by the enemy, a large part of the Greek armed forces withdrew, and Leonidas stayed behind with around 1000 fighters (300 Spartians and 700 Thespians), probably to cover the withdrawal of the remaining troops, and fell together with the entire Spartan army and thespian troops. 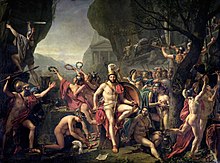 After the end of the Persian Wars in 479 BC The northern Greek amphictyony put up a plaque to commemorate the last fight of Leonidas and his 300 Spartians. The inscription became famous as the Thermopylae epigram . Forty years after the battle, King Pausanias is said to have transferred the remains of Leonidas to Sparta and buried them in a tomb opposite the theater.

Commons : Leonidas I.  - Collection of images, videos and audio files