The early dynastic period or early dynasty (abbreviated FD or Ed for early dynastic ) is a historical epoch from the early history of Mesopotamia (where Sumer and Akkad are the core areas), which began around 2900 BC following the Ǧemdet-Nasr period . And ended with the establishment of the kingdom of Akkad under Sargon I around 2340. With the emergence of writing around 3200 BC In Sumer, archaeological and written sources from the early dynastic period can be combined for the first time, which contributes to a more differentiated observation of Mesopotamian history.

On the basis of excavations of the ruins of Tell Agreb , Tell Asmar and Hafa , i , which took place in 1930 in the Diyala area (east of Baghdad ), the early dynastic period was divided into three parts (here the "middle" chronology):

The most famous written document of the early dynastic period is the so-called Sumerian King List . In addition, a wider range of different texts appears in this epoch. In addition to texts relating to economics and administration, there are also religious, literary and legal texts.

The city-states in Sumer and Akkad were ruled autonomously by a city prince (called ensi or lugal ). Since most of the city-states in the lowlands between the Euphrates and Tigris were in a limited metropolitan area, there were often disputes and wars among the city-states, with each prince naturally constantly striving to secure his own territory and to gain new territory. The strong fortifications of the Sumerian and Akkadian cities, which were built especially during this period, testify to this. 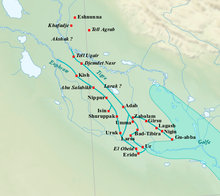 Important cities in Lower Mesopotamia during the Early Dynastic Period, with the approximate course of the rivers and the ancient coastline of the Gulf.

One of the main characteristics of this epoch is certainly the rural exodus, which attracted large numbers of people to the large cities of the water-rich areas of Mesopotamia. On the one hand, drought in the arid areas and, on the other hand, the increasing salinization of the soil caused by humans, led to a decline in the rural population.

As a direct consequence, the population of the cities increased rapidly, which inevitably led to conflict. Court documents from the time bear witness to a wide variety of disputes.

In the early dynastic epoch a separation between state and temple occurs for the first time in the history of Mesopotamia. Compared to the older Uruk period , where no differentiated statements can be made about certain functions of buildings in the sacred area or the related professional groups such as priests, the characteristics of sacred buildings (temples) and secular buildings (palaces, representative buildings) now make it clearer. In addition, there is a social change associated with it. A noble upper class emerged, consisting of privileged families, which were closely connected to the ruling family. This change in society brought with it a constant striving for luxury and prestige among the upper classes; Visible on lavishly decorated graves and so-called follower graves such as the royal grave of Ur , where the entire court followed the deceased to his death.

Regarding the architecture of the temples, it can be said that from now on they were no longer built at ground level, but on a kind of terrace, which provided a solid foundation. As in earlier times, the temples were also walled here.

The economy represented a kind of "planned economy" in the early dynastic period. Palace and temple controlled trade, agriculture and commercial activity and regulated taxes. However, as the king's officials increasingly enriched themselves with the taxes, this led to the abuse of power and exploitation of the already disadvantaged population. A king who intervened against this grievance in order to protect the exploited and thus indebted people was Urukagina of Lagasch (also Iri-kagina), who at the end of this epoch around 2350 BC. Lived. He drafted reform laws that included debt relief, deliverance from bondage, and other socio-political advances. In setting up these reforms, as well as in every act that he carries out as king towards the state, he invokes Ningirsu , the city god of Lagasch. Representing this justification of royal rule and associated duties as being willed by God is seen throughout early Mesopotamian history.