The Khiamien ( English Khiamian ) is an archaeological culture in the Levant and on the Sinai Peninsula , which is assigned to the Epipalaeolithic (also Proto-Neolithic ) or the early Pre-Ceramic Neolithic . Many contemporary researchers see it as the earliest form of PPNA , others see Khiamia as a transition phase between the late Natufian ( Final Natufian ) and the actual Neolithic . It belongs to the early ancient oriental cultures at the beginning of the development of the productive way of life and is considered to be the pioneer of subsequent fully Neolithic phenomena such as the Sultania , the Aswadia and the Mureybetia .

However, since its introduction, an extensive debate has been going on as to whether the Khiamien should be viewed as an independent unit. In particular, the possibility that stratigraphic intermingling could play a role if it occurs between layers of the Natufia and the Sultania, and the relatively short-lived horizon, call the established terminology into question.

The Khiamien got its name after the archaeological site on the terrace of el-Khiam . This is located in the Judean Desert not far from Wadi Khureitun near the Dead Sea . In the early 1930s, the area was first explored by René Neuville through excavations. The first insights were still tied to the then established ideas of the Neolithic as the “age of polished stone” and the strongly condensed Levantine chronology. The artefacts found were accordingly initially assigned to the Natufia culture, which Dorothy Garrod had only defined in 1932 based on her evaluations of the Shuqba Cave in Wadi en-Natuf. Garrod further postulated that the Natufia culture did not exist before the 5th millennium BC. To be dated. Since no concrete Neolithic Age was known in the Levant at that time, Neuville concluded from his new finds from el-Khiam that the gap between the (according to his interpretation) Mesolithic Natufia and the Copper Age could now be closed. This also gave the impression of a “transitional culture” for the first time.

After further investigations by Perrot in the 1950s and by Echegaray in the 1960s, the latter suggested, according to European tradition, the term “Khiamian” as an independent cultural unit. In his concluding work, he describes the Khiamien in 1966 as the first manifestation of the Neolithic in the Levant. Fundamental to him are inventories in the tradition of the Natufien, which, however, in contrast to this, already contain arrowheads. Building on this, Prausnitz also postulated Khiamien in the same year as a direct follow-up culture of Natufien, but revised his statement four years later. On the one hand, re-assessments of the artifacts, e.g. B. by Ofer Bar-Yosef (1970), as well as the steep slope at the place of discovery, to the assumption that the finds (due to erosion ) may not have been found in-situ and therefore cannot be used as a basis for a stratigraphic sequence. Studies on burrowing rodents such as voles also confirmed the thesis. On the other hand, the large number of newly introduced cultures, industries , inventories and the relationships and analogies between them presented research with the problem of establishing a generally applicable terminology. Joan Crowfoot-Payne dedicated herself to this task by dividing the Levant into smaller geographical zones with locally based cultural units in 1976, thus also including the Khiamien in her system. In their view, two industries coexisted in the early Neolithic: the Khiamien, which largely followed the tradition of the Natufien, and the fully Neolithic Sultania of Jericho . Seven years later, Crowfood-Payne revised her judgment and assumed that the Khiamien had preceded the Sultania; nevertheless, it did not fundamentally rule out an overlap between the two units.

In the following decades, a number of plants with a similar Silex industry were investigated across the entire Levant (and beyond) . The meanwhile refined techniques in the field of calibrated carbon dating in combination with stratigraphic investigations assigned these to an almost analogous time of origin with the Khiamien. In addition, they created a new discourse about the Levantine cultural areas at the beginning of the Neolithic. To this day, the terminology remains complicated and inconsistent.

The chronology of the French Maison de l'Orient (ASPRO) assigns this group of finds to period 2a and thus a period from 10,000–9,500 BC. Chr. ( Calibrated ) to. Other data narrow the actual Khiamien to a horizon of approx. 11,700–11,200 uncalibrated BP and 12,200–11,800 calibrated BP. This corresponds to the first cultural area after the end of the Younger Dryas period , which created a cool and dry climate in the Levant. As a result, the forest lines shifted and drought spread over much of the Fertile Crescent . The associated changes within the animal and plant world forced the inhabitants of the areas to adapt, which some researchers consider to be the trigger of the Neolithic Revolution . At the time of the Khiamien, a warm and humid climate with rich forests opened up again in the Levant and the Holocene began .

For the stratigraphic determination, the layers Mureybet IB / II, Salibiyah IX and Hatoula played a role in the evaluation. Evaluable data from radiocarbon dating are still sparse due to a lack of material and often relate to adjacent layers.

Location of important sites from period 2a (Khiamien) according to Cauvin

The distribution area of ​​Khiamia extends from the Sinai with the site Abu Madi, which is located east of the Katharinenkloster , via Jordan (Azraq), the Anti-Lebanon (Nasharini) to the central Euphrates ( Mureybet ) in the north. Other important sites are the eponymous el-Khiam in Palestine , also Salibiyah (IX) in the Jordan Valley, Hatoula in the Judean Mountains, Poleg (18M), Huzuk Musa, Abu Salem and Shunera (VI). Furthermore, the sites of Nahal Oren, Sheikh Hassan, Qaramel and Göbekli Tepe are classified as relevant. The assumed settlement focus was in the southern Levant. It is generally assumed that there was an overlap with the late Harifien of the Negev desert and the Sinai (Abu Madien), which is why both cultural areas are difficult to separate and are often called analog. In fact, it must be assumed that representatives of the Mediterranean Khiamien / Final Natufien with populations from the arid areas have joined forces to secure subsistence . The Qermezien on the northern sections of the Euphrates and Tigris , named after the place where it was found, Qermez Dere , has both Khiam Points and a similar inventory .

The Khiamien is still largely in the tradition of the Natufien . Accordingly, the people who are considered to be the direct descendants of the Natufian culture lived predominantly in hunter-gatherer communities, although there are approaches to the primitive agricultural use of wild grasses. The settlements in Khiamien increase to an average size of 1000 to 3000 m², which corresponds to about eight times the size of the camps in Natufien and are usually connected to permanent water sources. As a result, their traces can also be found systematically in the then Mediterranean forest areas of the lowlands. The proximity to rivers and large wadis also ensured the supply of firewood and building materials from the nearby forests. Economic use of the fertile alluvial soils cannot be ruled out either. The number of the population increases in a very short time, not least due to the favorable climate, from previously around 30–50 people per settlement to around 250–400 people within an early Neolithic settlement. Bar-Yosef interprets this as a clear indication of the cultivation of useful plants, but this has not yet formed the basis of nutrition. Cattle breeding can not be proven osteologically at this early stage , gazelles were still mainly hunted. The fact that some settlements were only used seasonally suggests continued mobility for the pursuit of game. In addition, the fishing and hunting of birds are gaining in importance and are therefore the main sources of food.

The people of Khiamien devoted more energy than their forefathers to the construction of their homes, which suggests more consistent use. The stone foundations are still predominantly round or oval, the walls are modeled from clay or mud bricks. Flat roofs secured with support posts add to the interior space. As an innovation, houses were now being built at ground level for the first time, while half of them were previously below it. 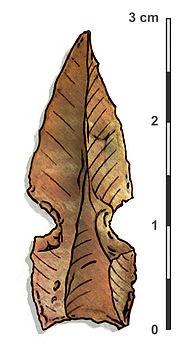 This group of finds is mainly defined by its lithic inventory and is still very close to the Natufien. This manifests itself primarily by the frequent use of concave or convex shaped microlites , which is about as Kompositgerät to geschäfteten were processed sickles. The inserts used for this often appear as large blades (38–74 mm) with minimal retouching . A technological innovation and a key artifact are the oldest known flint arrowheads with lateral scarf notches, so-called khiam points , which characterize the entire PPNA from the first appearance in khiamia. Their widespread distribution from southern Sinai to northern Iraq illustrates the considerable radius of interaction between the inhabitants of these areas. A distinction is made between 12 variants, each of which is characterized by the position of the notches or the basic shape. In addition, there are some regional arrowhead shapes that appear around the same time as the Khiam Points. Another big change is the increase in hand punch and drills from near zero to about 20 percent of the lithic inventory. Bueller sees this as an indication of the fact that clothing is made from animal hides or skins. His studies suggest that the burins were in a handle made of bone and thus enable the handy punching of dry skins. Gazelles seem to have been most suitable for further processing, which perhaps explains the concentrated hunt for this species in the PPN. Even scratches and scraper can be found in the inventory again. Surface retouched or polished stone axes , which are considered Neolithic markers, are not yet known from the context of the Khiamien find. Articles of daily use such as grinding stones made of ground or polished stone are also atypical.

While figurative representations of animals predominate in Natufien, figurines of women form the majority from Khiamien onwards. Cauvin sees the significant increase in female figurines and the striking presence of aurochs - either as a figure or as a ritual burial - a psychological turning point and a symbolic revolution that would have shaped a religious community as a result.

The majority of contemporary specialist literature cites Khiamien as the earliest form of PPNA. Nevertheless, the problematic definition, the chronological integration and the general acceptance are always the subject of discussions. The origin of this debate can be traced back to the pioneering work of Neuville and Garrod. In addition, the term of Khiamien has been based on inadequate data since its introduction. Accordingly, in 1996 Garfinkel suggested that the term Khiamien, which he considered outdated, should be overcome, since it would only have resulted from a mixture of layers that was wrongly interpreted as a separate phase. In response to this, the article Save the Khiamian! , in which Ronen and Lechevallier put forward arguments that speak especially for a Khiamien layer at the Hatoula site. However, the assigned layers are generally very thin and the geographical extent also varies depending on the interpretation. There are also temporal differences and local colors within the inventory depending on the region. Many researchers such as Goring-Morris and Belfer-Cohen assess the Khiamian as a brief phase of upheaval between the Final Natufian and the Sultania, with overlaps of the latest remnants of the Harifien culture. You see here the peak of the trend, which is already heralded in the late / final Natufian. The actual PPNA follows this transitional character, represented by individual regional variants, distributed over almost the entire Middle East .

Researchers such as Francis Hours, Olivier Aurenche or Andrew Moore designed schemes that were as neutral as possible as a contrast - accordingly, both the "Period 2 (a)" of the ASPRO chronology and the "Early Neolithic 1" describe the same phenomenon.