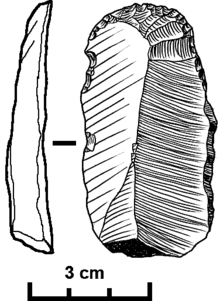 The term scratch is used inconsistently in the archaeological literature. The separation between scraper and scratch is not clear, the same applies to the assumed functions.

A tool for removing the finest chips is usually referred to as a scratch, which differs from the "scraper" only in its narrow working edge. Accordingly, the scratch has a scraping function and a narrow working edge. Tines and burins are to be viewed as special scraper shapes. Stefan Unser pointed out this grievance. The dilemma can at best be solved with the geometrically defined stone device morphology proposed by François Bordes, which is independent of functions. Here the scratch ( grattoir , end-scraper ) is determined by a more or less arch-shaped retouching on a narrower end of the tee or the blade.