The Kassite period (also Middle Babylonian period ) is a four-century period in ancient oriental history , which essentially corresponds to the Late Bronze Age in that region. It joins a " dark century " after the conquest of Babylon by the Hittite king Muršili I in 1595 BC. And ends in a general collapse in the 12th century BC. The term is mainly used for the southern part of Mesopotamia; northern Mesopotamia is called the Central Assyrian period .

After the end of the 1st Dynasty of Babylon , there were hardly any historical sources available from Babylonia for around 170 years. However, it is known in particular from King List A and the synchronous chronicle that this time was marked by fierce battles for supremacy in southern Mesopotamia. The Kassites , a former nomadic people who coexisted with the local population, increasingly asserted themselves . King Ulam-buriaš achieved a victory over the Meerland dynasty , with which the Kassites finally secured their supremacy.

Old traditions were carried on under them. In particular, they used the ruler's titulature, known from ancient Babylonian times, as well as the Akkadian language , so that their own language is hardly known. The political unification of Babylonia, which was now called Karduniaš , made its economic rise possible. At the end of the 15th century BC Then Babylonia appeared as an internationally important state. In particular, the rulers Kara-indaš and Kuri-galzu I corresponded with the pharaohs Amenophis II and Thutmose IV. Dur-Kurigalzu was founded as the new capital .

In the following years there were long rivalries with the northern neighbor Assyria . With Aššur-bel-nišešu , the Tigris was contractually established as a common border. From Aššur-uballiṭ I , Assyria pursued an increasingly expansive policy. There were major battles at Sugaga on the Tigris and Kilizu , in which the Assyrians were defeated. The situation only eased again when both countries had to contend with their own problems: Babylonia with wars against Elamites and Arameans ; Assyria with battles against the so-called mountain countries , katmuḫḫu and nomads. From the early 13th century BC Assyria increasingly gained the upper hand until Tukulti-Ninurta I finally conquered Babylon. Through Enlil-nādin-šumi a Kassite dynasty came to power again, which came to an end with an invasion by Šutruk-Naḫḫunte II and which was followed by the Isin II period . 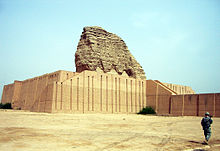 Residential houses from this era were found mainly in Tell el-Muqejjir ( Ur ). Overall, little has changed compared to the previous epoch. Important buildings are the palace of Aqarquf and the temple complex there . The Inanna Temple , built by Kara-indaš in Warka , whose facade is exhibited in the Vorderasiatisches Museum in Berlin , is also well-known.

Kudurrus appear as a new type of handicraft . For a long time they were referred to as boundary stones because of their inscriptions , but were deeds of land donations. Presumably it was very artfully embodied copies of original on clay tablets held cuneiform legal documents that have been placed in temples.

There were some innovations in glyptics . In the Kassite period, a total of four stylistic groups of seals can be distinguished. Especially in the early Middle Babylonian period, forms from the Old Babylonian period continued to be used, but simplified. Later, seals with representations of animals and plants appear, which are also greatly simplified. Finally, so-called "pseudo-Kassitic" seals were used, which were made of frit and also showed simplified Old Babylonian motifs. In addition to cylinder seals , seal rings were also used.