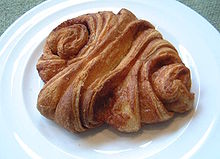 A Franzbrötchen is a sweet pastry made of Danish pastry that is filled with sugar and cinnamon. It is a specialty of Hamburg cuisine and is often served with coffee and cake or for breakfast. The spread was limited to the greater Hamburg region, since the beginning of the 21st century, different types of Franzbrötchen have also been known in other cities in Germany.

There are variations of Franzbrötchen with raisins , crumble , chocolate chips , marzipan , poppy seeds or pumpkin seeds .

The name is possibly a reminiscence of the Hamburg French period (1806–1814). According to tradition, there was an elongated Franzbrot (also Franzbroot , Franschbroot , plural Franzbreud , Franschbreud ) that was similar to the baguette . A Hamburg baker is said to have fried such Franzbrot in a pan with fat. Today's Franzbrötchen is said to have originated from this. However, the historian Dirk Brietzke is of the opinion: "Everything you can find on this, whether in print or online, is pure speculation".

Nevertheless, both in older books and in more recent publications there are some documented connections that show a coherent picture of the origins of Franzbrötchen. One of the oldest sources is a handout from 1825 with which a Hamburg baker named Hieronymus Frisch, registered as a lot and cake baker , announced the opening of a bakery in the old town on April 1, 1825 . In his advertised range he offers, among other things: "Round and frizzy Franzschbrod, very fat and leafy, are made according to the recipe from the Franzschen baker in Altona". Since this reference coincides with tradition, the author Manfred Beseler and the art historian Annette Hillringhaus interpret this as a clear indication that the Franzbrötchen is a creation by the Franzschen or French baker in Altona , which was then under Danish administration .

The Franzsche Bäcker was for several generations a kind of institution in Altona, which was founded with the granting of an exception to the so-called baker's justice by the Danish King Friedrich V on February 13, 1747 for the Huguenot religious refugee Antoine Sabatier (1684–1764). The year before, Antoine Sabatier had acquired a baker's inheritance in Grosse Bergstrasse , including an oven or bakery with the associated house for family, journeymen and apprentices as well as the privilege to bake bread for sale, but also the obligation at any time to deliver good and unadulterated bread. He bought the house and property from the Harry family , who had been running a bakery here since 1668 and whose history is well documented. The company chronicle also contains the note:

“This bakery has now become a special piece of city history. Settegast's son sold the property in 1746 to the Huguenot Antoine Sabatier, who had to be admitted to the Altona bakery as the first master confectioner by special order of the Danish king. The sweet Danish pastry, which is now called Viennese bread in Denmark , seems to have become fashionable at the royal court at that time and to have begun its triumphal march. The French bakery flourished under Sabatier's son Jean, and until the Second World War there was a popular pastry shop on the Große Bergstrasse, which was still called the Franzsche Bäckerei. "

In 1899 the Thiedemann family sold part of the property to the city of Altona to redesign the Große Bergstraße and built a new residential and commercial building with three floors and two shops on the ground floor. After the death of her husband, Catharina Thielemann (unknown - 1948) took over the legacy, which was now designated as a bakery and confectionery. In 1907 she transferred the bakery to the master confectioner Heinrich Dittmer. From 1917 to around 1940, his son Heinrich Dittmer junior was the last Franz baker from Altona on the Backerbe Grosse Bergstrasse 9. The house was destroyed by bombs in 1943. Due to the redesign of Altona in the post-war period, this section was included in Nobistor Street . In the early 1960s, the clothing company C&A was built on the property . After the branch closed in 1993, the building stood empty for a few years or was partially used by creative groups. In 2007 the demolition for the expansion of an endoclinic took place .

For the Danish pastry, a yeast dough is first prepared and rolled , that is, with drawing fat, usually butter, rolled out and folded several times. After a final resting phase, the dough is rolled out thinly and sprinkled with a sugar-cinnamon mixture, then rolled up into a roll and cut into four to five centimeter pieces. The squeezed or twisted shape that has become typical in recent years is achieved by pressing with a thin round piece of wood - for example the handle of a wooden spoon - in the middle of the dough piece. This will cause the sugar and cinnamon filling to come out to the side. When baking, the sugar caramelises on the surface and, along with other ingredients, determines the typical taste of the Franzbrötchen. Until the 1990s, a pressed form was predominant.

In his novel " Buddenbrooks: Fall of a Family ", Thomas Mann repeatedly lets the family doctor, a Dr. Grabow, appear. On several occasions he prescribes "a little dove, a little Franzbrot ..." , which, in the Grabowian sense, is not supposed to have a medicinal effect, but rather aims to counteract the otherwise opulent eating habits of the wealthy Lübeck merchant family.