The blusher ( Amanita rubescens ), also Rötender Amanita or meat mushroom called, is a type of fungus from the family of Wulstlingsverwandten . The pink to reddish discoloration on injured areas is distinctive and gives it its name. Older fruiting bodies are often streaked with equally discolored maggot burrows. The pearl mushroom is common, widespread, and can be found in both deciduous and coniferous forests. 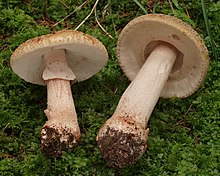 The membranous partial velum of the perl fungus ( A. rubescens ) , which usually hangs down on the stem as a cuff, is clearly grooved.

On the outside, the fruiting bodies of the perl fungus often show reddish spots.

The external appearance is very variable depending on the location and the weather. The hat, which is almost spherical at the beginning and later diffusing, measures 4 to 16 centimeters in width. It is mostly flesh brown, pale reddish to brownish-red in color, but can also have yellow-brown, gray-yellow to gray-white tones; the edge is not or hardly grooved. The cap is covered with gray-white or reddish-gray, flat remains of velum . The hat skin is easily removable; the trama below is pale reddish in color. The white lamellae have red-brown spots, especially with age. The leaves are quite broad, close together and have a soft consistency. They are pinned to a stick.

The whitish stalk later also gets red-brown spots or stripes, especially in the lower part and in injured areas. It becomes up to 16 centimeters long and three centimeters thick, whereby it tapers towards the top. In the case of a longer dry season, the surface is clearly banded transversely to the longitudinal axis and therefore appears chattered . The stem becomes hollow with age. After the hat has been turned up, the skin-like white partial velum remains as a hanging cuff with a clearly grooved top . Above this, the stem is striped white up to the hat, underneath it is fibrous-flaky to small-scaled. The stem base is bulbously thickened, with no offset edge, but a gradual transition. At the transition area there are little pronounced warts arranged in a ring around the stalk. The white flesh slowly reddens, is often maddened and then has typical wine-red discolored tunnels. It has an insignificant smell and an initially sweet, later a bit scratchy taste. The spore powder is white and amyloid .

The spores themselves are elliptically shaped at 7–9 × 5–7 micrometers.

The pearl mushroom resembles other brownish colored amulas . The reddish tones in the meat and on the hat are unique in the amulets and make the pearl mushroom easily recognizable in its typical shape. 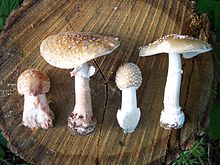 Pearl mushroom ( A. rubescens ) and panther mushroom ( A. pantherina ) on the right in a comparison in different stages of elongation

When collecting for food, confusion with the highly poisonous panther mushroom ( A. pantherina ) is particularly serious. In addition to the lack of red tones, it is also distinguished by small, white, dot-shaped remains of velum, a non-rubbed (in exceptional cases slightly grooved) lower and smaller cuff at the level of the center of the stem and a thinner bulb with a characteristic beaded edge, often with further belt-shaped beads . The panther mushroom is usually built more slender, its hat edge is usually grooved. It also differs in its radish smell.

The gray amanita ( A. excelsa ) is edible, but of poor taste quality. Its habit is very similar to that of the pearl mushroom; In addition to the lack of red tones, it also differs from this one because of its radish-like odor.

The slightly poisonous porphyry brown amanita ( A. porphyria ) is distinguished by a purple hat color, a clearly separated stem and a cuff that is not at most slightly grooved.

The rare poisonous king fly mushroom ( A. regalis ) shows a yellow zone under the cap skin in a longitudinal section, has an unrubbed ring, often covered with brownish flakes, and a warty stem tuber.

Who collects Perlpilze should furthermore also the poison suspicious Rauen amanita ( Amanita franchetti can reliably detect), which is currently not (yet?) Is not common, but can occur locally in Germany in warm woods. It differs in the pointed, yellowish remains of velum on the hat and yellow flakes on the ring and bulb.

The pearl mushroom can be found in mixed beech and oak forests, in spruce, fir, spruce and pine forests as well as in parks and gardens. It prefers older stands that are near the end of their development ( climax vegetation ). The fruiting bodies appear solitary to gregarious from June to October, and under appropriate conditions also into December.

The fungus can be found on moderately fresh to moist, acidic to neutral, rarely also weakly alkaline tendrils , regosols , brown and parabrown soils , podzols . These are mostly gaunt or at most moderately alkaline and nutrient-rich. The source rock are chromatic or Keuper sandstone, base poor silicates and corresponding loess and silt.

The pearl mushroom is a mycorrhizal fungus that forms a symbiosis with spruce and red beech in particular .

The pearl mushroom is distributed meridional to boreal in the Holarctic . It has already been detected in North and Central America, in Europe (including the Canary Islands ), in Africa in Morocco and Algeria as well as in Asia in Israel, Asia Minor , in the Caucasus , in Siberia , on Kamchatka as well as in Korea and Japan.

In Europe, the species is probably widespread in all countries. It can be found from Great Britain and France in the west to Belarus and Russia in the east and from Iceland and Fennoscandinavia in the north to Spain, Italy and Bulgaria in the south. To the north, the area extends to the 70th parallel. In Germany the fungus is common and common everywhere.

The pearl mushroom appears in different color variants and can also take on different appearances influenced by the weather. For example, there is a pure white variant. Furthermore, the var. Annulosulphurea is distinguished, which has a clearly sulfur-yellow cuff and stem tip. The fruiting bodies are usually thinner and have a smaller hat, which is grooved on the edge.

The pearl mushroom is edible if it has been heated well. Raw it is poisonous due to the heat-labile gastrointestinal toxins and hemolysins . The hat skin and the cuff should be removed to refine the taste. Opinions differ about the food value. While some attribute it to be of moderate nutritional value due to its rather weak taste, it is highly valued by others due to its delicately mild taste. However, it is often attacked by fungus mosquito larvae ("maggots").

The following gallery illustrates the great color variability of the pearl mushroom.