Mother of vinegar on the bottom of a vinegar bottle 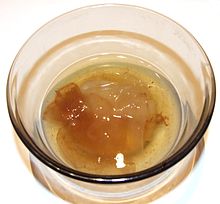 Separated mother of vinegar in a bowl

The mother of vinegar (also known as vinegar kahm or vinegar mushroom ) is a gelatinous, string-like mass of acetic acid bacteria ( Acetobacteraceae ) that can form when wine or other slightly alcoholic liquids are left open for a long time. It ferments alcohol to acetic acid with the help of oxygen from the air .

In traditional vinegar production according to the Orléans process , mother vinegar is used to "inoculate" the alcohol-containing starting substance and thus to accelerate the acetic acid fermentation . This inoculation is done classically by vinegar flies (Drosophila). The wine used should not be sulphurised or only slightly sulphurised . During fermentation , the bacteria involved produce u. a. Acetaldehyde , so that vinegar that has not yet fully reacted can have an unpleasant, pungent odor.

Vinegar mother can also develop in commercial vinegar afterwards if it was not completely fermented. In spite of its somewhat unaesthetic appearance, mother vinegar is completely harmless and can be consumed without hesitation.